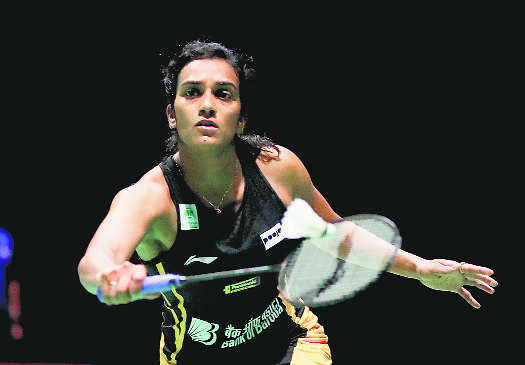 PV Sindhu makes a backhand return during her second round match against Pai Yu Po on Wednesday. REUTERS

Two-time silver medallist PV Sindhu produced a commanding performance in her opening match at the BWF World Championships here today. Sindhu, who had reached the finals of Indonesia Open last month, looked in good touch as she controlled the rallies and outsmarted Chinese Taipei’s Pai Yu Po 21-14 21-14 in a 43-minute contest.

The fifth-seeded Indian, who received a bye in the opening round, will face USA’s Beiwen Zhang, seeded ninth, in the pre-quarterfinals. Sindhu had lost to Zhang at the India Open finals last year.

Seventh seed Kidambi Srikanth fought back after losing the opener to beat Israel’s Misha Zilberman 13-21 21-13 21-16 in the men’s singles second round. He will next face 12th seed Kantaphon Wangcharoen of Thailand.

The Indian pair of Manu Attri and B Sumeeth Reddy suffered a 16-21 19-21 loss to sixth seeds Han Cheng Kai and Zhou Hao Dong of China in the men’s doubles.