''Most massive pulsar yet known discovered''

WASHINGTON: Researchers have found the heaviest ever known neutron star—the compressed remains of massive stars—and one of the densest objects in the known universe that weighs 2.14 times more than the Sun. 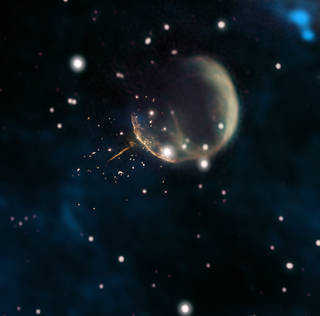 Researchers have found the heaviest ever known neutron star—the compressed remains of massive stars—and one of the densest objects in the known universe that weighs 2.14 times more than the Sun.

Astronomers have for long tried to unravel many mysteries surrounding neutron stars, such as how their constituent subatomic particles, neutrons, buckle under pressure, how their spin is affected under pressure, and the tipping point when gravity wins out over matter and forms a black hole.

Researchers using the Green Bank Telescope (GBT) of the National Science Foundation (NSF) in the US have made an advance in getting answers to these questions.

They discovered that the neutron star designated J0740+6620 is the most massive observed to date, weighing 2.14 times more than the Sun occupying a space that was only 30 kilometre across.

"This is significant because it helps put constraints on the physics happening deep within neutron stars' ultradense cores," Thankful Cromartie, a graduate student at the University of Virginia in the US, and co-author of the study told PTI over email.

She said that recent estimates by scientists had put a limit on the weight of neutron stars before they collapse into black holes at 2.17 times the mass of the Sun, and the current findings challenge the size limits neutron stars could have.

"The most important implication of finding a 2.14-solar-mass neutron star is that it may rule out some neutron star interior equations of state—ones that dictate the neutron star would have collapsed into a black hole at a mass of less than 2.14 solar masses," she told PTI.

She added that finding the maximum mass of neutron stars that physics would allow could teach a great deal about the colossal heavenly bodies.

Using data from the GBT, the researchers found that one of the neutron stars being studied had a mass greater than twice that of the Sun.

On further probing, they found the more precise mass.

The energy radiated from the magnetic poles of some spinning neutron stars, called pulsars, can be detected from observatories on the Earth, and the beams from these flash across space in a lighthouse-like fashion, the study noted.

Since pulsars spin with phenomenal speed and regularity, the researchers said that the astronomers use them as the cosmic equivalent of atomic clocks.

The precise timekeeping, according to the researchers, helps astronomers measure the masses of stellar objects, and improve their understanding of astrophysical phenomena, the researchers said.

They added that the detected pulsar also had a companion white-dwarf—the remnant core of a collapsed star after its outer layers have been exhausted.

Both the pulsar and the white dwarf spun in tandem with each other, the study noted.

When the pulsar passed behind the white dwarf, Cromartie and her team observed a subtle delay—on the order of 10 millionths of a second—in the arrival time of the signals.

The study noted that the gravity from the white dwarf warped the space around it, causing the pulses from the rotating neutron star to travel a little farther since they had to bend their way around the distortions caused by the white dwarf.

"The orientation of this binary star system created a fantastic cosmic laboratory," said Scott Ransom, an astronomer at NRAO and co-author on the paper.

"Neutron stars have this tipping point where their interior densities get so extreme that the force of gravity overwhelms even the ability of neutrons to resist further collapse.

"Each "most massive" neutron star we find brings us closer to identifying that tipping point and helping us to understand the physics of matter at these mindboggling densities," Ransom added. — PTI