Saturn beats Jupiter after the discovery of 20 new moons

WASHINGTON: Researchers have found 20 new moons orbiting Saturn, increasing its tally of moons to 82, surpassing Jupiter’s 79—an advance that may shed more light on the origin and evolution of the ringed planet. 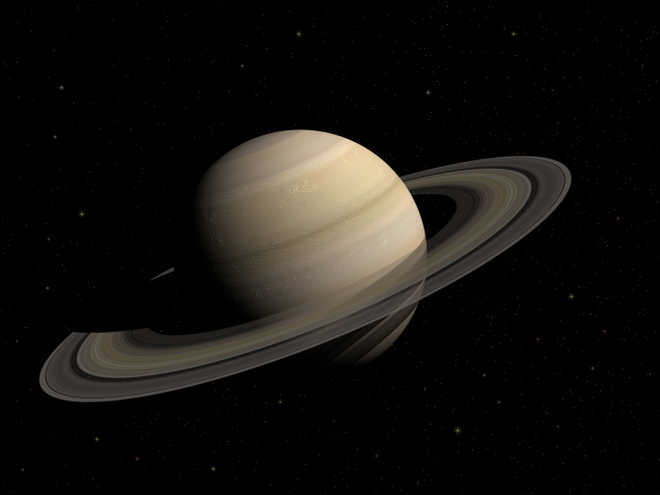 Researchers have found 20 new moons orbiting Saturn, increasing its tally of moons to 82, surpassing Jupiter’s 79—an advance that may shed more light on the origin and evolution of the ringed planet. Photo for representation only. — Thinkstock.

Researchers have found 20 new moons orbiting Saturn, increasing its tally of moons to 82, surpassing Jupiter’s 79—an advance that may shed more light on the origin and evolution of the ringed planet.

According to the researchers, including those from Carnegie Institution for Science in the US, the newly discovered moons were about five kilometers in diameter, with seventeen of the moons orbiting the planet backwards—in a direction opposite to that of Saturn’s rotation around its axis.

The findings, announced at the International Astronomical Union’s Minor Planet Center, revealed that the other three moons orbited in the the same direction as Saturn’s rotation in what is called prograde motion.

Two of the prograde moons are closer to Saturn, and take about two years to revolve around the ringed planet, the researchers mentioned.

They also added that the more-distant backward orbiting moons, and one of the prograde moons took more than three years to complete its path around Saturn.

“Studying the orbits of these moons can reveal their origins, as well as information about the conditions surrounding Saturn at the time of its formation,” said Scott S. Sheppard of Carnegie Institution for Science, who lead the discovering team.

The researchers mentioned that two of the newly discovered prograde moons may have once comprised a larger moon that was broken apart in the distant past.

The newly announced retrograde moons also seem to have similar orbiting angles around Saturn to other previously known moons of the planet, which the researchers said may indicate they were also fragments from a larger parent moon that may have broken apart.

According to the researchers, one of the newly discovered retrograde moons is the farthest known moon around Saturn.

“This kind of grouping of outer moons is also seen around Jupiter, indicating violent collisions occurred between moons in the Saturnian system or with outside objects such as passing asteroids or comets,” said Sheppard.

One of the prograde moons, they mentioned, has an orbit inclination near 36 degrees—similar to the other known grouping of inner prograde moons around Saturn called the Gallic group.

But, according to the researchers, this new moon orbited much farther away from Saturn than any of the other prograde moons, suggesting that its path around the planet may have been pulled outwards over time, or might not be associated with the more inner grouping of prograde moons.

The researchers mentioned that if a significant amount of gas or dust were present as a larger moon broke apart and created clusters of smaller moon fragments, there may have been strong frictional interactions between the smaller moons, the gas, and the dust, causing them to spiral into the planet.

“In the Solar System’s youth, the Sun was surrounded by a rotating disk of gas and dust from which the planets were born. It is believed that a similar gas-and-dust disk surrounded Saturn during its formation,” Sheppard said.

He added that these collisions occurred after the planet-formation process was mostly complete, and the disks were no longer a factor—based on clues that these newly discovered moons were able to continue orbiting Saturn after their parent moons broke apart.—PTI

22 hours ago
3
Chandigarh Tragedy at PG

21 hours ago
8
Chandigarh Tragedy at pg