PATIALA: Ahead of the paddy harvest season, there is some good news in store for the farmers in Punjab as a new study published in world’s leading scientific journal, Science Magazine, says farmers in Punjab, Uttar Pradesh and Haryana can increase their income by over 20 per cent using Happy Seeders and also reduce greenhouse emissions per hectare by 78 per cent. 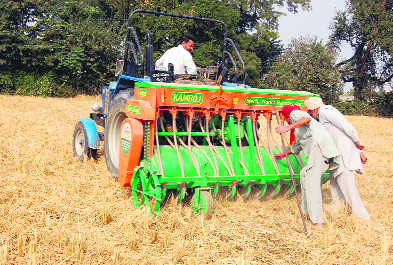 Ahead of the paddy harvest season, there is some good news in store for the farmers in Punjab as a new study published in world’s leading scientific journal, Science Magazine, says farmers in Punjab, Uttar Pradesh and Haryana can increase their income by over 20 per cent using Happy Seeders and also reduce greenhouse emissions per hectare by 78 per cent.

Every year over 25,000 cases of farm fires are reported in Punjab, blamed for poor air quality in Delhi and surrounding states.

A research paper “Fields on fire: Alternatives to crop residue burning in India”, published in the world’s leading scientific journal, Science Magazine, indicates that using the Happy Seeder agriculture technology to manage rice residue has the potential of generating Rs 6,000-11,500 more profit per hectare for the average farmer.

The paper evaluates the public and private costs and benefits of 10 alternate farming practices to manage rice residue including burning and non-burning options. “The Happy Seeder-based systems emerge as the most profitable and scalable residue management practice as they are, on average, 10-20 per cent more profitable than burning. This option also has the largest potential to reduce the environmental footprint of on-farm activities, as it would eliminate air pollution and reduce greenhouse gas emissions per hectare by more than 78 per cent as compare to all burning options,” it states.

The research was published last week. This work was jointly undertaken by 29 Indian and international researchers from The Nature Conservancy, International Maize and Wheat Improvement Center (CIMMYT), the University of Minnesota, Indian Council of Agricultural Research (ICAR), and several others.

Every year, some 23 million tonnes of rice residue is burnt in the states of Haryana, Punjab and Western Uttar Pradesh, contributing significantly to air pollution and short-lived climate pollutants.

Residue burning has enormous impacts on human health, soil health, economy and climate change. “Despite its drawbacks, a key reason why burning continues in northwest India is the perception that profitable alternatives do not exist. Our analysis demonstrates that the Happy Seeder is a profitable solution that could be scaled up for adoption among the 2.5 million farmers involved in the rice-wheat cropping cycle in northwest India, thereby completely eliminating the need to burn. It can also lower agriculture’s contribution to India’s GHG emissions, while adding to the goal of doubling farmers’ income,” says Priya Shyamsundar, lead economist at The Nature Conservancy and one of the lead authors of the paper.

The Government of India’s subsidy in 2018 for in situ rice residue management has partly addressed a major financial barrier for farmers, which has resulted in an increase in Happy Seeder use. However, other barriers still exist, such as lack of knowledge of profitable no-burning solutions and impacts of burning, uncertainty about new technologies and burning ban implementation and constraints in the supply-chain and rental markets.

Secretary, Agriculture, Punjab, Kahan Singh Pannu backed the study claiming that their department has been promoting that burning stubble was not an option and “Happy Seeders are the future”.