JALANDHAR:The 550th birth anniversary of Guru Nanak Dev may still be months away (November 12), but residents of Sultanpur Lodhi and adjoining areas have already pledged to throw open the doors of their houses for the devotees expected to descend on the holy town. 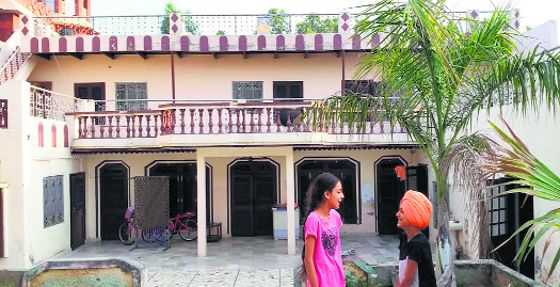 The house of Gurvinder Singh of Ahmadpur village in Kapurthala, which will be used to host the sangat. Tribune photo

The 550th birth anniversary of Guru Nanak Dev may still be months away (November 12), but residents of Sultanpur Lodhi and adjoining areas have already pledged to throw open the doors of their houses for the devotees expected to descend on the holy town.

The residents, both Sikhs and Hindus, have also offered to provide meals and transportation to the devotees, coming from abroad or far-off places in the country. Some NRIs have already handed over the keys to their vacant houses to neighbours or organisations arranging for the stay.

Many locals have offered to spare one or more rooms. Tent cities are also being set up by the government and social organisations. To ensure that the arrangement is foolproof, advance booking and liaison efforts are already on. The government, SGPC, gurdwara managers, political parties and social bodies are all charting out lists of such host and guest families.

Gurvinder Singh, who works in the team of environmentalist Balbir Singh Seechewal, said, “We will make arrangements for hosting one lakh families. So far, we have already arranged for the stay of 50,000. Around 20,000 vehicles have also been pledged. We began working on this around two years ago. We launched booking recently by opening portal www.parkashpurab550.in. We have also launched a  mobile application for navigation. The guests will have to share their Aadhaar ID or passport numbers with the hosts for proper registration.”

Gurvinder said, “We are covering houses not just in Sultanpur but in a 20-km radius around it, including in Shahkot, Nakodar and even Jalandhar city. The app that we provide will also send alerts to volunteers regarding their duty time. We have spent Rs 8 lakh on developing software and the app. But the entire service that will be extended will only be voluntary. I have myself offered my house at Ahmedpur village in Kapurthala.”

AAP leader Sajjan Singh Cheema said, “I will be shifting to my house in Jalandhar in those days and will offer my house at Dabulian village in Sultanpur Lodhi to devotees. I have told all my party workers to at least share one room of their houses. We are preparing lists for the same.”

Gurdwara Ber Sahib manager Satnam Singh said, “We are also making lists of hosts and guests. We are also arranging rooms in schools, colleges and sports academies to accommodate the sangat.”