CHANDIGARH: Actor-turned-politician Sunny Deol has kick-started the promotions of ‘Pal Pal Dil Ke Paas’, which marks the debut of his son Karan Deol. 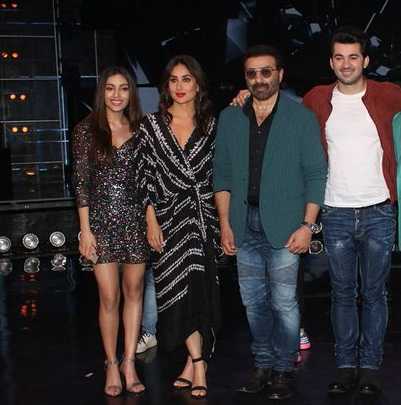 Actor-turned-politician Sunny Deol has kick-started the promotions of ‘Pal Pal Dil Ke Paas’, which marks the debut of his son Karan Deol.

The three were seen on the sets of reality show ‘Dance India Dance’ season 7, where Kareena Kapoor Khan is one of the judges.

Kareena has recently returned from London, and has already begun shooting. She was seen wearing a black and white dress.

In a recent interview, Sunny revealed: "It is a very emotional moment for me to see my son Karan make his debut on the big screen."

"I hope the audience appreciates him and showers him with the same kind of love that they have given me for so many years," added the proud father.

Set in Himachal Pradesh, ‘Pal Pal Dil Ke Paas’ will tell a love story with essence of finding the emotion for the first time—with all its innocence, doubts and the complexities.

The film, directed by Sunny Deol, will release on September 20.