NEW DELHI:In his maiden reply to the first debate in the newly constituted 17th Lok Sabha, Prime Minister Narendra Modi today slammed the Congress for imposing Emergency 44 years ago and asked the grand old party if it had ever acknowledged any national leader beyond the first family. 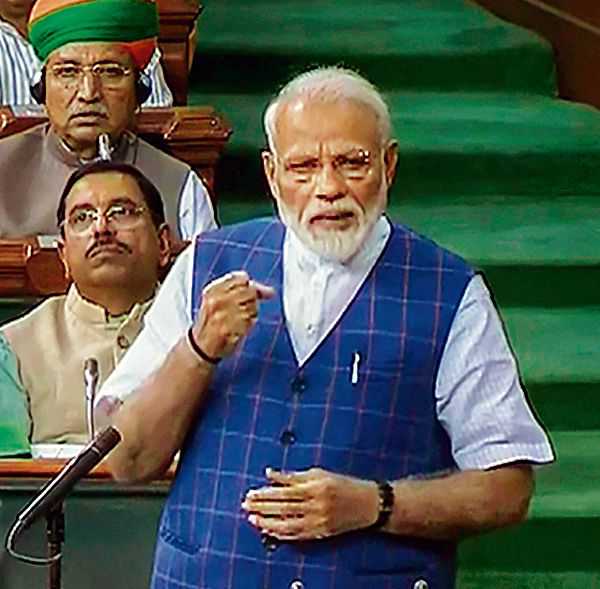 PM Narendra Modi speaks in the Lok Sabha during the Motion of Thanks on President’s Address at Parliament in New Delhi. PTI

In his maiden reply to the first debate in the newly constituted 17th Lok Sabha, Prime Minister Narendra Modi today slammed the Congress for imposing Emergency 44 years ago and asked the grand old party if it had ever acknowledged any national leader beyond the first family.

Responding to a two-day debate on Motion of Thanks on President’s Address, which was passed by a voice vote, the PM took jibes at the Congress, telling the party that in its urge to fly higher it had lost touch with the ground.

“We are not competing with you for heights. Our dream is to remain in touch with our roots. May you go higher… Aapki oonchai aapko mubarak,” said the PM, flanked by Defence Minister Rajnath Singh. In veiled references to Congress Lok Sabha leader Adhir Chowdhary’s speech in which he hailed Jawaharlal Nehru for past achievements and taunted the BJP with “who built Bhakra-Nangal, NTPC, SBI” posers, the PM today said: “A lot of questions were thrown at us yesterday as to who did this and who did that? Who imposed Emergency on the night of June 25? Today is June 25. Who crushed the soul of India? The country was converted into a jail, the media gagged, Opposition leaders arrested. Why… because one person lost power after a court verdict. Today, let us repeat our commitment to the Constitution so that no one ever dares to undermine it again.”

The PM asked the Congress if it ever hailed any non-Gandhi leader like BR Ambedkar, Atal Bihari Vajpayee, PV Narasimha Rao, Manmohan Singh or Pranab Mukherjee. “You accuse us of not acknowledging past governments. have you ever acknowledged anyone beyond one person?” he asked.

With UPA chief Sonia Gandhi and Congress president Rahul Gandhi in attendance, the PM alleged there was nothing in the grand old party for anyone except the first family. “Why was Narasimha Rao or Manmohan Singh not given the Bharat Ratna during the Congress rule? Who gave Bharat Ratna to Pranab Mukherjee, the man who spent a lifetime nurturing the Congress?” As he urged the Opposition to bury partisan interests in marking the150th birth anniversary of Mahatma Gandhi and the 75th year of Independence in 2022, the PM quoted Nehru, saying: “Can we work together to realise the dream of Pt Nehru who said in 1951 that duties are above rights?”

In his 70-minute speech, he stressed building a “new and modern India”

“With the Swachh Bharat mission, we have fulfilled one dream of Ram Manohar Lohia. Now we must work for water conservation through the Jal Shakti ministry,” the PM said as he described the Lok Sabha verdict as a matter of “spiritual satisfaction” rather than a poll win.

On corruption, the PM said: “Some members asked why is Person A not in jail or Person B not in jail. I want to tell them this is not the Emergency where governments jailed people as they felt. These decisions are taken by the courts. Courts will decide on jail and bail. Meanwhile, if someone gets bail he should enjoy.”

Opposition’s amendments to President’s Address were defeated by a voice vote.

It never looked beyond one family: Modi

Who imposed Emergency on the night of June 25?  The country was converted into a jail, the media gagged, Opposition leaders arrested.

In 1950s you (Cong) missed chance to implement Uniform Civil Code. In 1980s you lost opportunity to end injustice towards Muslim women even when courts supported petitioner Shah Bano

Jawaharlal Nehru laid the foundation in early 1960s but it kept getting delayed for decades. UPA created hurdles and I as CM had to protest to get clearances. The project got going just before I became PM

You (Rahul) may get sound sleep after mocking Make in India but the country will get nothing. India had 18 ordnance factories at the time of Independence whereas China was nowhere. We must work together