This elections, BJP turns to small, but influential deras

HISAR: After the conviction of Gurmeet Ram Rahim Singh and Rampal in criminal cases, the BJP is reportedly eyeing small but influential deras in towns seeking support in the Assembly elections. 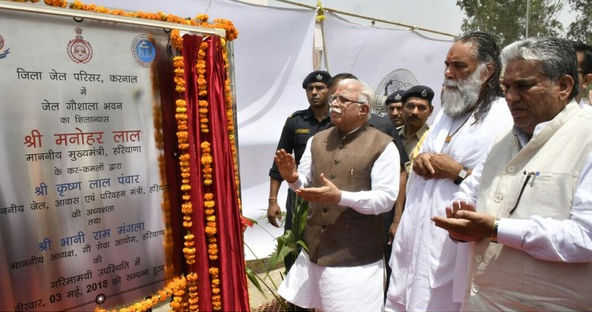 After the conviction of Gurmeet Ram Rahim Singh and Rampal in criminal cases, the BJP is reportedly eyeing small but influential deras in towns seeking support in the Assembly elections.

Several deras in the state are known for their political links, especially with the Bhartiya Janata Party (BJP). As the BJP has an inclination towards Hindu deras, heads of several deras in Haryana are finding it easier to side with the ruling party in the Assembly elections.

The deras that are close to BJP leaders are Swami Dharamdev based in Pataudi, Gurugram district; Gyananand Maharaj based in Kurukshetra and having influence on the GT road belt from Ambala to Panipat districts; three deras in Rohtak — Baba Balak Nath of Mast Nath Dera, who is a BJP MP from Alwar in Rajasthan, Baba Kapil Puri of Gaukaran dham and Baba Karan Puri; Baba Keshavnath of Sehar village in Loharu subdivision of Bhiwani district; Raghwanand based in Nirjan village of Jind district; and Dera Baba Bhumman Shah located at Sangar village in Sirsa district.

Sources say many of the dera heads, especially Swami Dharamdev of Pataudi, Baba Keshavnath of Loharu and Raghwanand of Jind district, were ticket aspirants this time. Raghwanand had once contested the Assembly poll from Adampur on the BJP ticket.

Swami Dharamdev and Gyananand Maharaj have links with BJP leaders and are often seen at functions with them. A host of senior leaders of the BJP, the Rashtriya Swayamsevak Sangh (RSS) and the Vishwa Hindu Parishad (VHP) camped in Rohtak-based deras during Chintan Shivir of the VHP on September 17, 18 and 19.

The BJP leaders also visited Dera Baba Bhumman Shah in Sirsa, which wields a considerable influence in the Kamboj community. They also have close links with Baba Kala Peer in Koth Kalan village of Hisar district. Gujarat Governor Acharya Devvrat had visited the dera in March 2018.

Political expert Krishan Swaroop Gorakhpuria says several deras are associated with the BJP — some openly and others secretly. “As followers of Ram Rahim and Rampal have turned against the BJP after their conviction, small deras have come to the party’s rescue. These deras have a widespread following,” he adds.

Dera Sacha Sauda of Ram Rahim had backed the BJP in the 2014 elections, helping the party form government.