On three days in New York last week, US President Donald Trump spoke on Kashmir — after his meetings with Pakistan PM Imran Khan and PM Narendra Modi and during his final press conference at the UN Headquarters on Thursday. 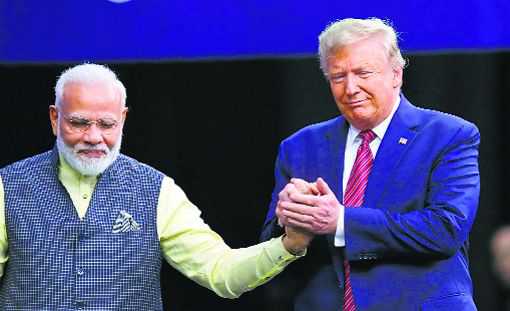 Work it out: The efforts that India would have made through various channels failed to dissuade Trump from delving into the Kashmir issue.

On three days in New York last week, US President Donald Trump spoke on Kashmir — after his meetings with Pakistan PM Imran Khan and PM Narendra Modi and during his final press conference at the UN Headquarters on Thursday. They showed his grasp of what Kashmir conundrum entails in US relations with India — and Pakistan. Trump often wears the deceptive look of a lazy man with unfocused approach, which obscures the definitiveness of his position on issues — be it the relations with allies or with Russia or the endless war in Afghanistan. Equally, it is a misconception that Trump can be manipulated through flattery and trade-offs.

Delhi would have been on the learning curve through the tumultuous week that followed ‘Howdy, Modi’. The Indian establishment would be sensing by now that the ‘buy-one-get-one-free’ approach doesn’t work with the Trump administration. The need arises for the America hands in the Indian establishment to take some abacus classes on Trump’s politics and diplomacy. They failed to grasp that unlike the vacuous “exceptionalism” and liberal values that American presidents traditionally espoused as catechism in the US foreign policies, Trump takes his America First project with dead seriousness — for good or bad for the rest of the world.

If the establishment had led Modi to believe that an offer to invest $2.5 billion in the US shale industry would mollify Trump and silence him on Kashmir and win much-needed respite from US pressure vis-a-vis the situation in J&K, it turned out to be an error of judgment. Trump showed no inclination to change tack. Nor did he seem overzealous regarding the Indian-American ‘vote-bank’, which, traditionally and overwhelmingly, showed its preference for the Democratic Party. It becomes an altogether different question if we overestimated the influence of the erudite but tiny Indian-American community that forms one per cent of America’s population to change Trump’s policies.

Trump didn't mention Kashmir in his Howdy Modi remarks and he listened patiently to Modi’s strident speech till the finish, but seized the first opportunity in New York to call it an ‘aggressive’ speech. And Trump also clarified that when he referred to ‘radical Islamic terrorism’ at Howdy Modi, he actually had Iran on his mind, not Pakistan. Interestingly, he said both these things in the presence of Imran Khan. Evidently, Trump doesn’t buy the Indian narrative that the tragedy unfolding in J&K or cascading tensions between India and Pakistan devolve upon ‘terrorism’. Trump not only refrained from any statement that equated the J&K situation with terrorism but also insists that the pathway to normalisation of India-Pakistan tensions and to overall regional security and stability lies via a negotiated solution of the Kashmir problem. Equally, Trump insistently urges for India-Pakistan dialogue. He echoes Imran Khan’s apocalyptic narrative that a nuclear flashpoint is bound to arise if the J&K situation deteriorates and leads to a war.

Without doubt, the efforts that Delhi would have made through various channels failed to dissuade Trump from delving into the Kashmir issue. Trump is acutely conscious of the centrality of the Kashmir issue, as he works on the strengthening of the US-Pakistan relationship and on US drawdown in Afghanistan. Again, he adamantly sticks to his offer to mediate between Modi and Imran Khan and has convinced himself that he is eminently qualified as a negotiator and arbiter to mediate on such an intractable issue as the Kashmir problem. Modi had reportedly told Trump that he was confident of sorting out India’s tensions with Islamabad bilaterally. Trump won’t publicly quarrel with that contention but he is wagering that India and Pakistan are not going to be able to resolve the Kashmir issue on their own steam and the way things are developing in J&K, tensions between the two nuclear powers may only escalate further, and a point will be reached sooner or later when US intervention will become imperative.

In his last press conference at the UN Headquarters, Trump pointedly said, “And with respect to Pakistan and India, we talked about Kashmir. And whatever help I can be, I said — I offered, whether it’s arbitration or mediation, or whatever it has to be, I’ll do whatever I can. Because they’re at very serious odds right now and hopefully that’ll get better. You look at the two gentlemen (Modi and Imran Khan) heading those two countries — two good friends of mine — I said, “Fellas, work it out. Just work it out.”  Those are two nuclear countries. They’ve got to work it out."

In immediate terms, US pressure can only mount on India to roll back the draconian measures curbing civil liberties in J&K and to respect the human rights. Significantly, Alice Wells, the top State Department official for South Asia, said unceremoniously on Thursday following Trump’s meeting with Modi in New York, “We hope to see rapid action (on J&K), the lifting of the restrictions and the release of those who have been detained.”

The past week has been a period of growing up for Indian diplomacy. As the euphoria over the Houston party subsides, clearly, it didn't have the desired outcome, no matter our cheerleading. In a stunning reversal of fortunes, while Modi’s American tour began with a joint appearance with Trump on a public stage projecting an unprecedented level of US-Indian camaraderie, it got rounded off in New York four days later on a somewhat sombre note with a hastily-arranged meeting with Hassan Rouhani, President of Iran, a country which in Trump’s rulebook is the apogee of international terrorism. The symbolism tells its own engrossing tale.