Governments across the world and most notably the US use instruments of state power like military pressures, diplomatic isolation, travel bans and economic sanctions as instruments of persuasion. 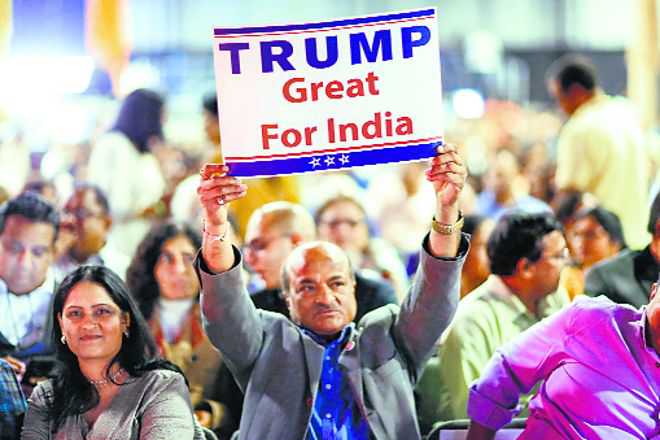 ...Maybe not: The problems India faces from Trump’s policies pale in comparison to the impact of enhanced US duties on China’s exports.

Governments across the world and most notably the US use instruments of state power like military pressures, diplomatic isolation, travel bans and economic sanctions as instruments of persuasion. President Trump has, however, devised a new instrument of state coercion to express his displeasure and announce his proposed actions. This 21st century diplomatic innovation by Trump is his ‘Twitter handle’.

Twitter was initially his mode of communication in domestic politics, during his bitterly fought presidential election campaign against Hillary Clinton. It has now become his favourite instrument to chastise America’s foes and friends alike, ranging from China and Iran to neighbours like Canada and Mexico, apart from allies like the EU and partners like India. American friends, however, aver that Trump uses this unique method of addressing foreign rulers, primarily to cheer up his domestic base, apart from informing the world of his late-night thoughts!

Trump has excelled himself before, when he took on an exceptional target — his country’s most loyal ally — the UK. He poured scorn on and ridiculed the serving British ambassador in Washington, Kim Darroch, who regards himself as the prima donna of Washington’s diplomatic corps. Trump also hit out at British PM Theresa May, now resigned, for allegedly mishandling the Brexit negotiations to fashion a ‘soft exit’.

His epithets included a description of Darroch as Britain’s ‘wacky ambassador’, a ‘very stupid guy’ and a ‘stupid fool’. May received her share of abuses for her ‘failed Brexit negotiation’. He described her diplomacy as ‘badly handled’ and accused her of going ‘her own foolish way’, while leading her country into a ‘disaster’. True to form, his tweet ended with inevitable boasting about American military and economic might! All this followed leaks of confidential reports Darroch had sent to Whitehall, which were highly uncomplimentary about Trump’s qualities of head and heart.

Only Israel and Saudi Arabia appear to be free from any ‘Trump tirades and tantrums’. Many in Washington aver that this arises from the closeness of the Saudi and Israeli leadership to Jared Kushner, Trump’s son-in-law. Kushner was recently in Bahrain, trying to sell his solution for Middle East peace to Arab leaders. The Kushner ‘solution’ required the Palestinians to renounce all claims to Jerusalem and the West Bank, in return for petrodollars from oil-rich Arab countries. The proposals were received coldly in Bahrain, with even Saudi Arabia making it clear that its approach to the Palestinian issue was distinctly different. Trump’s approach to crucial contemporary issues enjoys little international support. Even NATO allies differ with him on important issues like climate change and sanctions on Iran.

Trump’s desire to target India on trade issues became evident when Indian steel and aluminium products were hit with import duties of 25% and 10%, respectively, in March 2018. India’s exports of steel to the US of $761 million have fallen by 46% since. Trump also abolished the preferential duties that India was getting as a developing country. Trump’s tariff increases substantially hit India’s exports of mechanical and electrical machinery, chemicals, steel and auto parts. India retaliated in a measured manner, just over a month ago, targeting industries and agricultural products produced by Trump’s political/electoral supporters. They included new tariffs on imports ranging from almonds and walnuts to steel products.

The two sides decided to resolve these differences bilaterally, following the Modi-Trump summit in Osaka. Preliminary talks were held recently in New Delhi, with a visiting US delegation. India should, however, bear in mind that it is not the US alone that is unhappy with what it sees as growing Indian protectionist measures. The problems India faces from Trump’s policies pale in comparison to the impact of enhanced US duties on China’s exports. India’s annual exports to US amount to around $54.3 billion while China’s exports to the US amount to $539.67 billion annually. Recent restrictions curb China’s easy access to US high-tech products. The impact is being increasingly felt by China, whose remarkable industrial and technological transformation has been largely facilitated by access to US technology.

Resolving these issues is going to be more difficult than dealing with the protectionist restrictions that India faces now. While India’s exports to China have shown signs of rising, New Delhi has to devise strategies on how it could best utilise Chinese 5G networks and encourage Chinese investments in its industrial sector, at the same time ensuring that its national security is not compromised.

India is going to face other challenges which are the creation of the US Congress. The most important of these are the prospects of sanctions flowing from India’s acquisitions of Russian arms. India has let it be known that it has no intention of buckling under US pressure.

Banking and financial measures to bypass US sanctions were discussed during President Putin’s visit to India. They have since been put in place. While the US has threatened Turkey with sanctions for acquiring S-400 missile systems by ending the proposed supply of F-35 fifth-generation fighters, India has wisely stayed away from attempting to acquire such equipment from the US. The US Indo-Pacific strategy is premised on receiving support from Japan, South Korea, Vietnam, Indonesia and India — a strategy which would have little relevance without the participation of India.

The US uses the dollar in international finance to coerce others by resorting to threats of financial sanctions, without securing international approval. The time has come to counter this coercive use of power by increasing the use of euro and Chinese renminbi for global transactions. The EU is not too happy at being tied up by unilateral US sanctions on Iran, despite Iran abiding by all provisions of an agreement the EU signed, together with Russia, China and the Obama administration.