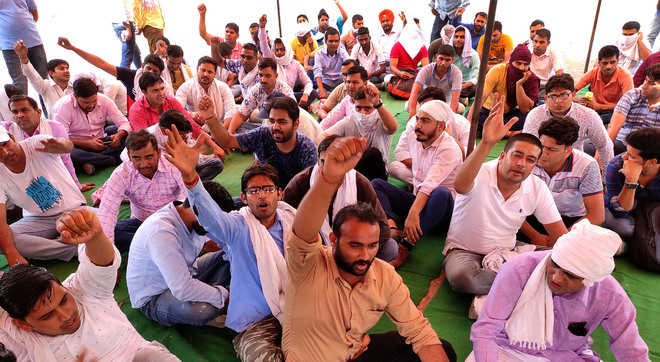 Teachers raise slogans in support of their demands during a dharna in Sector 5, Panchkula, on Thursday. TRIBUNE PHOTO: NITIN MITTAL

Vocational teachers, employed by the Education Department through contactors, began an indefinite dharna at Sector 5 here Panchkula today. They were protesting “exploitation” by the contractor.

Mukesh Kumar, Vocational Teachers’ Association, said they want their salary to be on a par with the contractual employees who are hired directly by the Education Department. He said according to the agreement, the contractors were supposed to give them Rs 18,000 per month, but they were making some deduction from the amount. “The Education Department should make sure that we are paid Rs 26,250 per month as is being given to the contractual employees,” said the teachers.

Kumar said a delegation of the association had met the sitting State Project Director (SPD) Rakesh Gupta, who told them that the new SPD would be joining tomorrow and they could take up the issue with him.

Kumar said if their demands were not fulfilled, they would lay siege to Chief Minister’s residence in Chandigarh.