We are open to new vistas of development now: Governor

JAMMU:Days after the Centre scrapped the special status of J&K, Governor Satya Pal Malik on Wednesday said the constitutional changes brought by the Union government (with regard to Article 370) were not only just, but it also would also open new vistas of development for the residents. 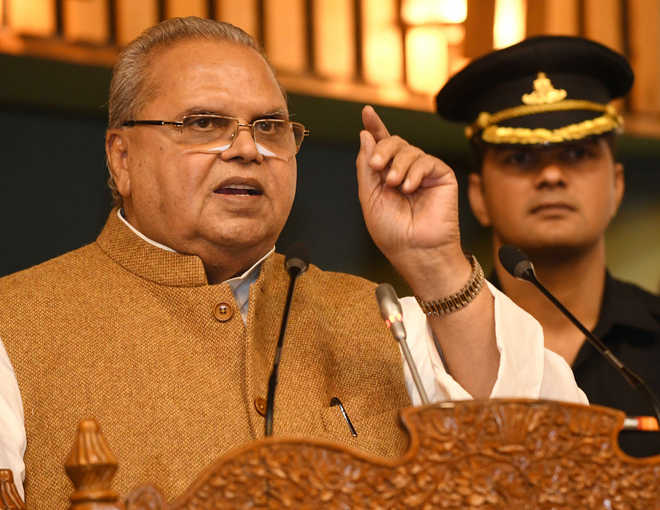 Days after the Centre scrapped the special status of J&K, Governor Satya Pal Malik on Wednesday said the constitutional changes brought by the Union government (with regard to Article 370) were not only just, but it also would also open new vistas of development for the residents.

The Governor, in his Independence Day message on Wednesday evening, said the common people of J&K had been distracted on the core issues of economic development, peace and prosperity for the past 70 years.

“Rather than focusing on core matters, people have been misled about issues that are not important for them. It’s amazing that whether it is an election or otherwise, public discourse never focused on issues of ‘Roti, kapda aur makaan’,” Malik said on the eve of 73rd Independence Day.

“With these changes, the veil has been removed. This will speed up economic growth and prosperity, promote good governance, usher in self-sufficiency, provide better job opportunities and more importantly bring sense of belongingness and oneness among the residents of J&K with the rest of the country,” he added.

The Governor also assured the people of J&K that their identity was not at stake nor had it been tampered with. “Our Constitution allows many regional identities to thrive and prosper. If you travel from Kashmir to Kanyakumari, one will see wide range of languages, cultures, religions and societies. Therefore, no one should get worried that their identity will be lost with the measures taken by the Centre,” Malik said.

“In fact, this opportunity can be used to promote the traditional cultures, values and languages in J&K. Kashmiri, Dogri, Gojri, Pahari, Balti, Sheena and other languages will have now opportunity to thrive in the new set-up. Various tribes and castes will find proper political representation,” the Governor added.

He said, “A long-pending demand of the people of Ladakh has also been fulfilled with the grant of the Union Territory status. This will enable them to realise their aspirations in spite of the problems they face on the account of a large and difficult terrain.”

The Governor also said his administration was aware of the problems of those residing in areas adjoining the International Border and therefore, it introduced the provision for the grant of reservation in direct recruitment, promotion and admission in different professional courses for them at par with those living along the Line of Control.

“Kashmir is not complete without the Pandits. My administration is committed to the safe return and rehabilitation of the Kashmiri Pandits to the Valley,” he said, adding that their return was possible only with the support and cooperation of all stakeholders, including the civil society, which shares a social and cultural bond with the migrants.

He further said they had a “zero-tolerance policy” towards militants and security forces were taking proactive action against them. “The recruitment of new militants has witnessed a downward trend and even the stone-throwing incidents after the Friday prayers have ended. The misguided youth are returning back to the mainstream. We have adopted a multi-pronged approach to contain cross-border infiltration that is giving positive results,” he claimed.

What’s in store for J&K, Ladakh