Will work on technique to improve personal best this season: Chopra

GOLD COAST:Neeraj Chopra, a junior commissioned officer in the Army, is only 20 but is already the greatest javelin-thrower in the history of Indian athletics. 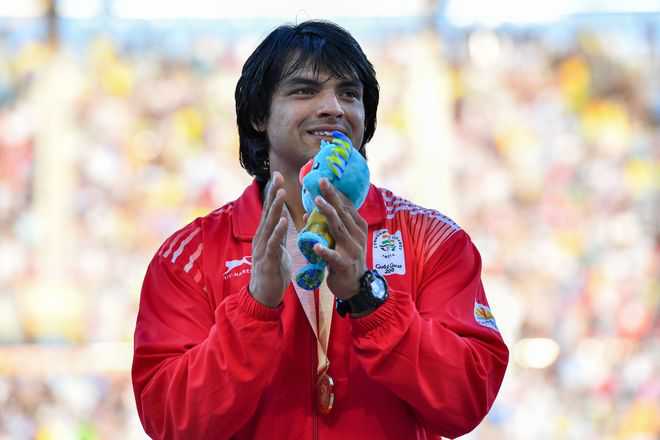 Neeraj Chopra, a junior commissioned officer in the Army, is only 20 but is already the greatest javelin-thrower in the history of Indian athletics. After becoming only the third Indian man ever to win an athletics gold in CWG (after Milkha Singh and Vikas Gowda), Chopra has raised hopes that he could become a medallist in a global event such as the World Championships or the Olympics. The Tribune spoke with Chopra after his feat. Excerpts:

How do you look back at your gold-winning performance?

I’d like to thank people from my state Haryana, and from all over the country. I had blessings from all over India. People wanted me to do well. This is the reason I was able to win gold for India. I want to thank them all.

Uwe Hown is the new India coach for javelin throw. You’d been training in Germany before you joined him in March. What have you been learning from him?

I’ve been improving steadily. For three months, I’d been in Germany, to train there. Working with Werner Daniels in Germany was also very helpful, and I’ve been training and learning from Uwe Hown also. I worked with the coach in Patiala too. I’ve learnt a lot from these coaches in the last six months.

After throwing, you often stumble and nearly fall down, which rarely used to happen with Indian throwers.

It happens automatically, I don’t do it deliberately. When one makes a greater effort, one runs very fast, then it happens.

Hown has spoken about technique, about the need to work on your technique.

Yes, there are things that need to be ironed out. Small faults in the technique, which I’ve been working on with my coach.

What are the things you’re focussing on?

There are small things like timing and point of release of the javelin that we’ve been working on, along with other minor things.

You came close to your personal best, were you targeting it?

Yes, I was trying for a new personal best, but failed by only 1cm. This is only the start of the season, and I’m going to work on my technique so that I could improve further.

You’ve been quite popular here, as you walked around the stadium, people were cheering madly for you even though you beat an Australian to gold.

Yes, but back home also there have been events in which there were lots of people. In Bhubaneswar (Asian Championships in 2017, where he won gold with 85.23m) also there were huge crowds in the stadium, and I had a big boost from them. Here also there was good support and it helped me a lot.

Physically, you’re not a huge or very bulky man, unlike Hown, who’s a giant.

Jan Zelezny, who is the current world record holder, also was not heavy and I’m also not very big and heavy. I weigh 86-87kg, and am a little under 6ft tall. His technique was very strong.

Your home state Haryana excels in sport. What’s the reason?

Yes, Haryana’s players get jobs, and that’s the reason sportspersons from Haryana are doing so well. But I would say that everywhere sportspersons should be supported because they reach a high level after a lot hard work.