Panipat: The Central Board of School Education on Monday organised a one-day workshop on capacity building for gender sensitivity at GD Goenka Public School here. 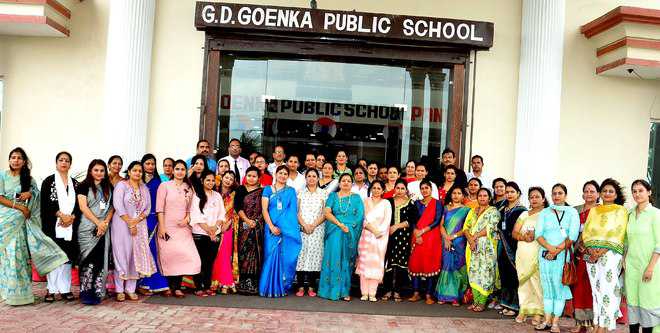 Panipat: The Central Board of School Education on Monday organised a one-day workshop on capacity building for gender sensitivity at GD Goenka Public School here. Neha Kashyap, principal, Maharshi Markandeshwar International School, Ambala, presided over the programme, while principals and teachers of various schools in Panipat, Karnal, Kurukshetra and Jagadhari participated in the workshop. Madhu Aggarwal, principal, GD Goenka, welcomed the guest by presenting a sapling to her. Neha Kashyap, resourceperson, stressed the need for gender equality.

Faridabad: DAV Centenary College held a seminar on the issue of intellectual property rights on its campus recently. While Pawan Kaushik, a senior lawyer of the Delhi High Court, explained in details copyrights, trademark, patents and IPR (intellectual property rights), Dr Satish Ahuja, principal, called upon students to explore the avenues of entrepreneurship instead of seeking jobs. He said youths must learn the basics and fundamentals of such regulations, so that they did not face hurdles later. As many as 280 students of the commerce department attended the one-day seminar.

Panipat: Students in SD PG College participated in Environment Day programme, which was held here with the support of the environment education and publicity wing of the Forest Department. Dr Anoopam Arora, principal, welcomed the 'Paudhagiri Abhiyaan' held at the college. He appealed to students to participate in the plantation mission and to plant saplings. "The forest area of the state is declining every year, that's why the government has decided to exhort the youth to join the mission," he said. Students presented 'Paudhagiri- Ek Sanskar' and 'Bin Pani Sab Soon' skits under the direction of Rita Ranjan, secretary, Shuruaat Society.

Sonepat: Prof Chitrarekha Kabre of the architecture department at  the DCR University of Science and Technology, Murthal, has cleared an exam for architect evaluator conducted under the Green Rating for Integrated Habitat Assessment (GRIHA). Prof. Rajendra Kumar Anayath, Vice Chancellor, has congratulated her. The VC said Energy Resources Institute had developed GRIHA, which was adopted as the national rating system for green buildings by the Government of India in 2007.