A robotic assistant that gets your mood! : The Tribune India

A robotic assistant that gets your mood! 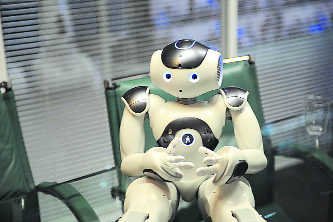 Davos: A new Socially-Aware Robot Assistant (SARA) took participants of World Economic Forum here by surprise by understanding their spoken words and non-verbal behaviour to build a relationship. Developed by students and professors of prestigious Carnegie Mellon University as a research project, SARA would be taken to other parts of the world, which may include India, for exhibition. It may eventually be licensed to some company for commercial use. PTI

Soap with Punjabi matriarch a hit in Ghana

Accra: An Indian television serial, “Kumkum Bhagya”, has been a hit in Ghana, a west African nation of 26 million, where it is aired in the local language Twi. The soap tells the story of Sarla Arora, a Punjabi matriarch who runs a marriage hall and is ever seeking ways to get her two feisty daughters, Pragya and Bulbul, married well, has been something of a hit. Loosely based on Jane Austen’s “Sense and Sensibility”, the soap is watched by 20 per cent of national audience. IANS

Canberra: Australia on Sunday announced an overhaul of security at all its international airports, with technology set to replace passports as means of identifying passengers by 2020. The country is seeking tenders for a self-processing system to be introduced later this year, which will use fingerprints, iris or facial structure recognition at major air and sea ports. The aim was for more than 90 per cent of passengers to avoid paperwork or manual processing by staff. IANS

London: Ants, which are famed for their highly developed work ethic, use the sun and memories of their surroundings to find the way home when they walk backward dragging a heavy load, scientists have found. A study showed that ants’ navigational skills are very sophisticated as when walking backward, they occasionally look behind them to check their surroundings and use this information to set a course relative to the sun’s position. IANS