WASHINGTON:US President Donald Trump has said that the impeachment proceedings against him in the Democratic-led House of Representatives are a "sham and should not be allowed. 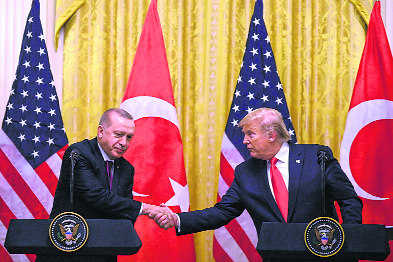 US President Donald Trump has said that the impeachment proceedings against him in the Democratic-led House of Representatives are a "sham and should not be allowed." The public hearing of the probe kicked off on Wednesday as William Taylor, the acting ambassador to Ukraine and George Kent, the deputy assistant secretary of State for European and Eurasian affairs, testified for more than five hours before the House Permanent Select Committee on Intelligence.

Trump is facing allegations of using his office to pressure Ukraine officials for personal political gain against Democratic presidential aspirant Joe Biden and his son Hunter, who served on the board of a Ukrainian gas company.

“This is a sham and shouldn't be allowed. It was a situation that was caused by people that shouldn't have allowed it to happen,” Trump told reporters at the White House during a joint press conference with the visiting Turkish President Recep Tayyip Erdogan.

Trump, who was in meetings with Erdogan for most of the day at the White House said that he did not watch the public hearing on his impeachment.

“I haven't watched. I haven't watched for one minute because I've been with the (Turkish) President, which is much more important, as far as I'm concerned,” Trump said, adding that he would want to find out who is the whistleblower.

It is the whistleblower, he said, who gave a lot of very incorrect information, including that of his call with the President of Ukraine in July, which he asserted was a perfect call and highly appropriate.“He wrote something that was much different than the fact,” he said. — PTI