China cracks down on Tibet CPC officials over links with Dalai Lama : The Tribune India

BEIJING:China’s ruling Communist Party is cracking down on its officials who are taking part in religious activities violating party’s ideology of adhering to atheism and secretly maintaining contacts with Tibetan spiritual leader the Dalai Lama, who has been branded as “separatist” by Beijing. 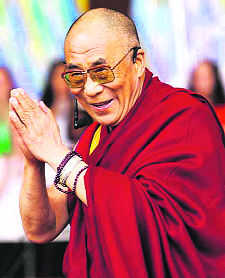 China’s ruling Communist Party is cracking down on its officials who are taking part in religious activities violating party’s ideology of adhering to atheism and secretly maintaining contacts with Tibetan spiritual leader the Dalai Lama, who has been branded as “separatist” by Beijing.

A video produced by the Tibetan provincial government has revealed cases in the region where local Communist Party of China (CPC) members violated the CPC regulations on religion, anti-separatism and anti-corruption, state-run Global Times reported on Saturday.

So far, three officials have been expelled from the party and 10 others received warning, the report said.

The Tibetan authority attaches great importance to the party discipline consistent with a nationwide campaign to strengthen the party management. It regulated 46 violations by local CPC members, including religious beliefs, according to the video produced by the publicity department of the regional commission for discipline inspection of Tibet and Tibet television.

The video, part of a four-episode series featuring the region’s efforts on anti-corruption and regulating the party members, was aired from January 28 to 31 on Tibet television, the report said.

Buddhism is a widely popular religion in Tibet, which is governed by the CPC ever since China took control of it in 1950. Despite his exile in India since 1959, the Dalai Lama remains the most revered religious figure in the Himalayan region.

The CPC remains an atheist organisation. Thus, CPC members are banned from religious beliefs, because they can only believe in Marxism and believing in other religions means betrayal of their chosen belief and it will shake their belief in Marxism and separate them from the party, Xiong Kunxin, an ethnic studies professor at Tibet University in Lhasa, told the Global Times. — PTI