WASHINGTON/DONETSK (Ukraine): German Chancellor Angela Merkel is set to argue against arming Ukraine in its conflict against Russian-backed rebels in Washington on Monday in the face of intense US Congressional pressure. 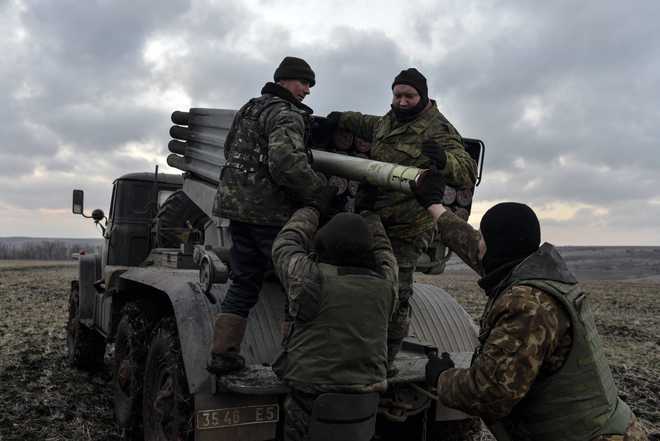 German Chancellor Angela Merkel is set to argue against arming Ukraine in its conflict against Russian-backed rebels in Washington on Monday in the face of intense US Congressional pressure.

Merkel's message that sending Western weapons to Kiev risks escalating the conflict is likely to get a sympathetic hearing when she meets President Barack Obama later in the day.

But critics of Obama's cautious foreign policy approach are already demanding decisive US action to help Kiev fight the separatists in eastern Ukraine, even if this deepens a standoff with Russian President Vladimir Putin.

Nine Ukrainian troops have been killed in the past 24 hours and seven civilians also died, Kiev said on Monday. Battle is particularly intense around the town of Debaltseve, a major rail and road junction northeast of the city of Donetsk.

At a security conference in Munich over the weekend, Merkel said it was uncertain whether further negotiations would lead to a deal with Putin but argued that all opportunities for a diplomatic solution should be pursued.

Merkel, who, with French President Francois Hollande, is due to meet Putin on Wednesday, has come under fire from US

foreign policy hawks in the Republican-controlled Congress who want defensive weapons sent to the Ukraine army.

“The Ukrainians are being slaughtered and we're sending them blankets and meals. Blankets don't do well against Russian tanks,” Senator John McCain said at the Munich conference. But Merkel made her opposition to arming Kiev clear.

“I understand the debate but I believe that more weapons will not lead to the progress Ukraine needs. I really doubt that,” she said.

A Russian speaker who grew up in East Germany, she has taken the lead in pursuing a diplomatic solution, speaking with Putin by phone dozens of times over the past year and meeting him in Russia, Australia and Italy in recent months.

Last week, Merkel and Hollande met Putin in Moscow and followed this up with a conference call on Sunday also including Ukrainian President Petro Poroshenko. The four are due to meet in Minsk on Wednesday, but so far no breakthrough has emerged in the nearly yearlong conflict that has claimed over 5,000 lives.

On Monday, Moscow warned that Putin will not be spoken to in the language of ultimatums. Asked about media speculation Merkel had issued him an ultimatum at talks on arranging a summit on Ukraine, Kremlin spokesman Dmitry Peskov told Govorit Moskva radio: “Nobody has ever talked to the president in the tone of an ultimatum — and could not do so even if they wanted to.”

Obama has to decide whether to supply weapons, impose tougher sanctions on Russia in the hope of forcing Putin to compromise, or throw his full weight behind the revised German-French peace initiative, even though US officials accuse Putin of shredding a prior cease-fire agreement signed in September.

US officials, speaking on condition of anonymity, say he will weigh his options carefully and will not be rushed into a decision.

"The timetable is fluid. This is too important to make a snap decision," one official said.

Officials say Obama has recommendations on his desk outlining the pros and cons of supplying Ukraine with lethal arms, such as anti-tank weapons, small arms and ammunition.

Some of Obama’s top advisers, including Ashton Carter, his choice for new defense secretary, increasingly favour such an approach. National security adviser Susan Rice said arms supplies were under consideration but signalled caution, and stressed the need to maintain unity with European allies.

Such a step would be taken only “in close consultation and in coordination with our partners, whose unity on this issue with us thus far has been a core element of our strength in responding to Russia's aggression”, she said.

Nine Ukrainian soldiers have been killed and 26 wounded in fighting with Russian-backed separatists in Ukraine’s eastern regions in the past 24 hours, a Kiev military spokesman said on Monday.

The spokesman, Vyacheslav Seleznyov, said government forces had come under attack from the rebels on about 100 separate occasions.

In eastern Ukraine, regional police chief Vyacheslav Abroskin said seven civilians had been killed by shelling in Debaltseve and another frontline town of Avdiivka on Sunday.

Meanwhile, an explosion and fire rocked a chemical plant outside a separatist stronghold in eastern Ukraine on Monday. Rebels said it was hit by government shelling.

No casualties or damage were immediately reported from the blast, which was so powerful that it was heard as far as downtown Donetsk.

The rebel mouthpiece Donetsk News Agency said on Monday that the chemical plant to the west of the city was hit by a Ukrainian artillery shell but the fire was put out and it posed no danger. Reuters/ AFP