SERBIAN-HUNGARIAN BORDER: Hungary’s right-wing government shut the main land route for migrants into the EU on Tuesday, taking matters into its own hands to halt Europe’s influx of refugees. 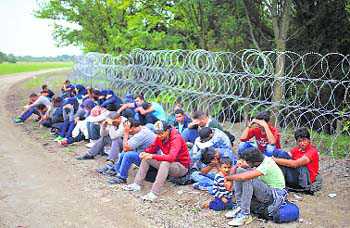 Detained migrants sit next to a barbed wire after crossing the border from Serbia near Asttohatolom, Hungary. Reuters

Hungary’s right-wing government shut the main land route for migrants into the EU on Tuesday, taking matters into its own hands to halt Europe’s influx of refugees.

An emergency effort led by Germany to force European Union member states to accept mandatory quotas of refugees collapsed in discord. Berlin called for financial penalties against countries that refused to accommodate their share of migrants, drawing a furious response from central Europe.

A Czech official accused Berlin of making empty threats while Slovakia said such penalties would bring the “end of the EU”.

Under new rules that took effect from midnight, Hungary said anyone seeking asylum at its border with Serbia, the EU’s external frontier, would automatically be turned back. Anyone trying to sneak through would face jail.

In scenes with echoes of the Cold War, families with small children sat in fields beneath the former communist country’s new 3.5-metre (10 foot) high fence, which runs almost the length of the border, topped with razor wire.

Prime Minister Viktor Orban, one of the continent’s loudest opponents of mass immigration, says he is acting to save Europe’s “Christian values” by blocking the main overland route used by mainly Muslim refugees, who travel through the Balkans and cross his country mainly to reach Germany or Sweden.

Hundreds of thousands of people have been arriving at the EU’s southern and eastern edges and making their way to the richer countries further north and west in the greatest migration to Western Europe since World War Two.

Germany and other relatively open countries say Europe has a moral obligation to accept refugees, and other EU states must be required to do their part.

Under its new rules, Hungary said it will now automatically turn back refugees who arrive by land over the main route from Serbia, a country it has declared “safe”. Asylum claims would be processed within eight days and those at the Serbian border should be rejected within hours.

“If someone is a refugee, we will ask them whether they have submitted an asylum request in Serbia. If they had not done so, given that Serbia is a safe country, they will be rejected,” Orban was quoted as telling private broadcaster TV2 on Monday. — Reuters