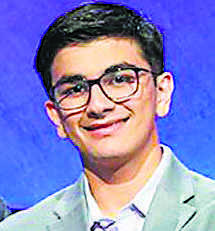 NEW YORK: An Indian-American youth has won the 2019 Teen Jeopardy contest taking the $100,000 prize in America’s most-watched individual quiz show. Avi Gupta’s victory televised on Friday marks a near-clean sweep of popular student contests in the past year by Indian-Americans. He is from Portland, Oregon, and completed high school recently. He beat out three other Indian-American teens in the contest, which featured a total of 15 students. The 2018 College Jeopardy, which also carried a prize of $100,000, was won by Dhruv Gaur. IANS

Germany to return painting stolen by Nazis to Italy

Berlin: Germany says it will return to Italy a painting by Dutch artist Jan van Huysum that was stolen by Nazi troops during World War II. The government said Foreign Minister Heiko Maas and his Italian counterpart Enzo Moavero will travel to Florence soon to hand the still-life “Vase of Flowers” back to the Uffizi Gallery. Its director, Eike Schmidt, had made a public appeal for the return of the painting earlier this year. The oil painting had been part of the Pitti Palace collection in Florence from 1824 until the outbreak of World War II. AP

Los Angeles: “Star Wars” star Daisy Ridley says she has decided to not return to any of the social media platforms.  The actor, 27, quit Instagram in 2016, following the abuse she received on her  tribute post for the victims of gun violence in the US, and Facebook shortly afterwards. “Cut off like a Skywalker limb. Also, when I want to see what my pals are up to, you can just Google it and go to Instagram,” Ridley said. The actor believes websites like Twitter have given people a huge platform to air negative views. PTI

London: Veteran British journalist Sir Mark Tully was presented with a ‘Lifetime Achievement Award’ here for his contributions to the UK-India relationship. Tully, the former Bureau Chief of the BBC, New Delhi, received a standing ovation on Friday from the gathering as he said that being in India was his karma. “I owe a great debt to India and I have been rewarded way beyond my expectations,” said 83-year-old Tully, who has been previously knighted by Queen Elizabeth II in the UK and conferred with the Padma Bhushan in India. The UK-India Awards are now in their third year. PTI

Haro: Revellers are covered in wine as people take part in a wine battle, in the small village of Haro, Spain. Hundreds of revellers participate in this famous summer battle throwing thousands of liters of red wine over each other. AP/PTI

Not only AAP, Sangrur bypoll results a setback for Cong, SAD too