NEW YORK:A former Marine of Indian-descent, who served in Afghanistan, is being hailed as a hero for helping scores of people escape from an Orlando gay club targeted by a terrorist who killed 49 persons in the deadliest shooting in US history. 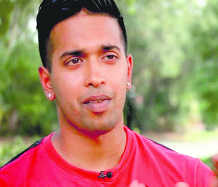 Imran Yousuf belongs to both ethnicities, Hindu and Muslim, since his grandfather is a Muslim and his grandmother and mother are Hindus.

A former Marine of Indian-descent, who served in Afghanistan, is being hailed as a hero for helping scores of people escape from an Orlando gay club targeted by a terrorist who killed 49 persons in the deadliest shooting in US history. Imran Yousuf, a 24-year-old bouncer at the Pulse nightclub, heard the gunfire break out early Sunday morning.

"The initial one was three or four (shots). That was a shock. Three of four shots go off and you could tell it was a high caliber," Yousuf, a 'Hindu' whose family had immigrated to Guyana from India four generations ago, told CBS News.

"Everyone froze. I'm here in the back and I saw people start pouring into the back hallway, and they just sardine pack everyone."

Yousuf knew just beyond that pack of panicked people — was a door — and safety. But someone had to unlatch it. “I’m screaming ‘Open the door! Open the door!’” Yousuf said. “And no one is moving because they are scared.”

“There was only one choice — either we all stay there and we all die, or I could take the chance, and I jumped over to open that latch and we got everyone that we can out of there.”

By creating the exit, Yousuf estimated that about 70 people were able to get out of the nightclub safely. “I wish I could've saved more,” CBS News quoted him as saying. "...There's a lot of people that are dead.” — PTI