GAZIANTEP (TURKEY): German Chancellor Angela Merkel arrived in a Turkish border province on Saturday to meet Turkish Prime Minister Ahmet Davutoglu as she works to ease tensions in the deal to tackle the migrant crisis. 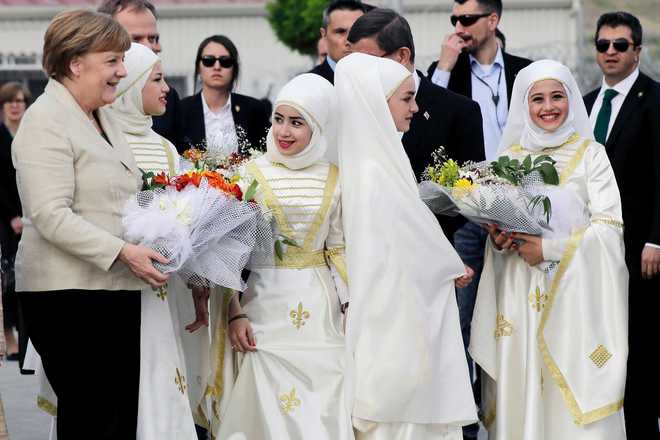 German Chancellor Angela Merkel arrived in a Turkish border province on Saturday to meet Turkish Prime Minister Ahmet Davutoglu as she works to ease tensions in the deal to tackle the migrant crisis.

Prior to its enforcement almost three weeks ago, Merkel lobbied European leaders to back the deal to return thousands of migrants from the Greek islands to Turkey. But as questions over its effectiveness, long-term viability and legality mount, so does the pressure on the German leader.

The agreement, coupled with border closures in Europe that meant smugglers could not secure passage to northern European states, initially slowed the numbers of new arrivals to Greece sharply.

But boats have been arriving with about 150 people a day, indicating the "hermetic sealing" of the route appears to be over, the International Organization for Migration (IOM) said.

Merkel, EU Council President Donald Tusk and European Commission Vice-President Frans Timmermans were due to discuss the migration crisis with Davutoglu after a visit to a refugee camp in the town of Nizip, amid a ramped up security presence.

Uniformed and plain-clothed police officers patrolled Gaziantep city, capital of the province that borders on Islamic State-controlled Syrian territory and has been hit repeatedly in recent weeks by rocket fire from the other side of the frontier.

Separately, footage showed Tusk disembarking from his official plane and being greeted by dignitaries.

A poster depicting Merkel's face and the words "Solidarity with the migrants. We are proud of our Chancellor Angela Merkel and Prime Minister Ahmet Davutoglu," in German was put up in the town. Another welcomed Davutoglu to Gaziantep.

At home Merkel faces criticism for allowing a German comedian to be prosecuted for insulting Turkish President Tayyip Erdogan.

The issue is likely to come up in the meetings, but a senior Turkish government official said the main focus of the visit by Merkel, Tusk and Timmermans would be on relations with the EU and implementing the migrant deal, including how to spend a promised 3 billion euros ($3.37 billion) in funding.

On Wednesday, Turkey's Foreign Minister Mevlut Cavusoglu said the European Union needed to be more pragmatic in releasing the cash meant to help manage the migrant crisis, saying there were problems with the delivery of the money.

Another side of the bargain, used to sell the migrant deal to the Turkish public, was Turks winning quicker visa-free travel to Europe, a pledge that now could go unfulfilled, at least by the June deadline he had wanted.

While presenting an opportunity for the political leaders who made it, the deal has been fiercely criticised by United Nations refugee and rights groups, as immoral and a violation of international humanitarian law against blanket returns.

Calling for an immediate halt to the implementation of the deal, Turkey has been blasted over detention of asylum-seekers, serious shortcomings in asylum procedures amid chaos on the ground.

"While Turkey and Europe haggle over long standing political battles like visa free travel, refugees continue to suffer with little chance of protection in Europe and serious violations against them in Turkey," said Gauri van Gulik, deputy Europe director at Amnesty International.

"All states have a duty to protect refugees that can't be traded away for political expediency."  — Reuters