TOKYO: Japan’s Emperor Naruhito proclaimed his ascension to the Chrysanthemum Throne on Tuesday and promised to respect the country’s constitution and fulfill all his responsibilities. 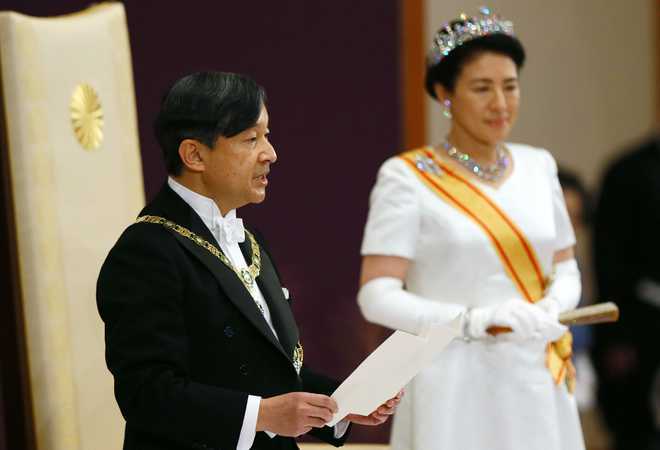 Japan’s Emperor Naruhito proclaimed his ascension to the Chrysanthemum Throne on Tuesday and promised to respect the country’s constitution and fulfill all his responsibilities.

Naruhito, 59, made the remarks wearing a dark orange robe in a ceremony conducted at the Seiden State Hall at the Imperial Palace in Tokyo while over 30 heads of state and government, invited to be part of the occasion, watched from another room, reports Efe news.

He was proclaimed emperor on May 1 in an event restricted to a small number of people, but public celebrations were being carried out on Tuesday.

The official enthronement lasted for half an hour and Naruhito proclaimed his ascension from a raised, canopied throne initially hidden by a curtain, next to a smaller throne where his wife Empress Masako sat.

All of this took place in the Matsu-no-Ma (Pine Chamber) state chamber, where only close relatives of the royal family were present, while the guests were in Shunju-no-Ma (Grand Hall), located on the other side of the central courtyard.

Naruhito read his message from a document folded like an accordion, which was handed to him by a chamberlain.

In his message, Naruhito recalled his father, Akihito, who abdicated on April 30 after three decades on the throne.

“I now... proclaim my enthronement to those at home and abroad,” Naruhito said.

“I pledge hereby that I shall act according to the Constitution and fulfil my responsibility as the symbol of the State and of the unity of the people of Japan,” the Emperor added.

He also vowed to wish for “the happiness of the people and the peace of the world” and pledged to act with responsibility and wisdom for the welfare of the Japanese people and the prosperity of humanity.

The common people will have to make do with a televised broadcast of the ceremony on Tuesday and wait for another three weeks to see the new Emperor up close.

Naruhito’s ascension marks the beginning of a new era in Japan, dubbed “Reiwa,” which roughly translates to “beautiful harmony”.

He is now the 126th consecutive Japanese emperor.

Japan’s monarchy is generally considered to be the longest-lived continuous hereditary royal dynasty in the world.—IANS