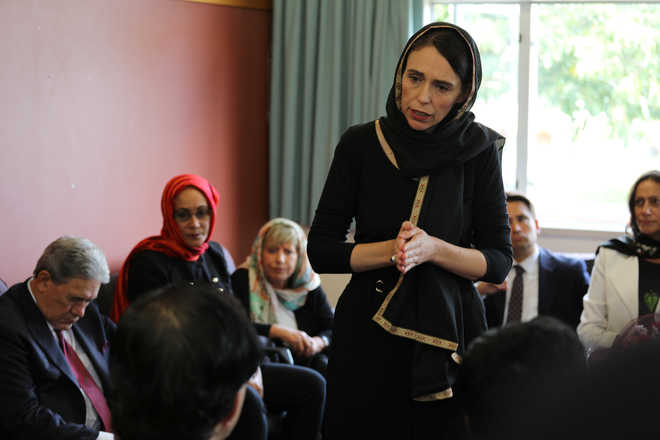 In the immediate aftermath of last Friday’s shootings at two mosques in the city of Christchurch, Ardern labelled the attack as terrorism and said New Zealand’s gun laws would change.

“On 15 March our history changed forever. Now, our laws will too. We are announcing action today on behalf of all New Zealanders to strengthen our gun laws and make our country a safer place,” Ardern told a news conference.

“All semi-automatic weapons used during the terrorist attack on Friday 15 March will be banned.”

Ardern said she expected the new laws to be in place by April 11 and a buy-back scheme costing up to NZ$200 million ($138 million) would be established for banned weapons.

All military style semi-automatics (MSSA) and assault rifles would be banned, along with parts used to convert weapons into MSSAs and all high-capacity magazines.

Under existing gun laws, a standard A-category gun license allows semi-automatics limited to seven shots. Live-streamed video of a gunman in one of the mosques showed a semi-automatic weapon modified with a large magazine.

Australia banned semi-automatic weapons and launched a gun buy-back after the Port Arthur massacre in 1996 in which 35 people were killed.

Ardern said that similar to Australia, the law would allow for strictly enforced exemptions for farmers for pest control and animal welfare.

“I strongly believe that the vast majority of legitimate gun owners in New Zealand will understand that these moves are in the national interest, and will take these changes in their stride.”

New Zealand, a country of fewer than 5 million people, has an estimated 1.2-1.5 million firearms, about 13,500 of them MSSA-type weapons.

Most farmers own guns while hunting of deer, pigs and goats is popular. Gun clubs and shooting ranges dot the country.

That has created a powerful lobby that has thwarted previous attempts to tighten gun laws.

Federated Farmers, which represent thousands of farmers, said it supported the new laws.

“This will not be popular among some of our members but ...

we believe this is the only practicable solution,” a group spokesman, Miles Anderson, said in a statement.

“I have a military style weapon. But to be fair, I don’t really use it, I don’t really need it,” said Noel Womersley, who slaughters cattle for small farmers around Christchurch.

“So I’m quite happy to hand mine over.”

Mosques to reopen for Friday prayers

Nada Tawfeek, who buried her father-in-law killed in the attacks, Hussein Moustafa, on Thursday, welcomed the ban.

“It’s a great reaction. I think other countries need to learn from her,” Tawfeek said.

Mohammed Faqih, a member of the Islamic clergy who flew in from California and attended the funerals for some victims on Thursday, said he was “extremely grateful” for the gun ban.

“I wish our leaders in the States would follow on her footsteps and do the same thing,” he said.

The first victims were buried on Wednesday and burials continued on Thursday, with the funeral of a school boy.

A mass burial is expected on Friday.

The bullet-riddled Al Noor mosque was being repaired, painted and cleaned ahead of Friday prayers.

Ardern will attend the Muslim call to prayer and a two-minute silence at Hagley Park, opposite the mosque. The call to prayer will be telecast nationally.

Armed police have been guarding mosques around New Zealand since the attacks. Police said there would be a “heightened presence” on Friday to reassure those attending weekly prayers.

Thousands of worshippers are expected at the Al Noor mosque, where the majority of victims died.

Most victims were migrants or refugees from countries such as Pakistan, India, Malaysia, Indonesia, Turkey, Somalia, Afghanistan and Bangladesh.

Australian Brenton Tarrant, 28, a suspected white supremacist who was living in Dunedin, on New Zealand’s South Island, has been charged with murder following the attack.

He was remanded without a plea and is due back in court on April 5, when police said he was likely to face more charges.

Twenty-eight people wounded in the attacks remain in hospital, six in intensive care.

As darkness fell, about 100 people gathered in a Christchurch square for an inter-faith vigil. Christian leaders led hymns and people laid ferns as a symbol of peace.

“Whatever you believe, whatever I believe, we’re still human beings. We still need each other,” Ibrahim Abdelhalim, imam of Linwood Mosque, where seven people were killed, told the crowd. Reuters