JEDDAH/DUBAI:US President Donald Trump on Wednesday said he ordered a major increase in sanctions on Iran as Saudi Arabia displayed remnants of drones and missiles it said Tehran used in a crippling weekend attack on its oil facilities. 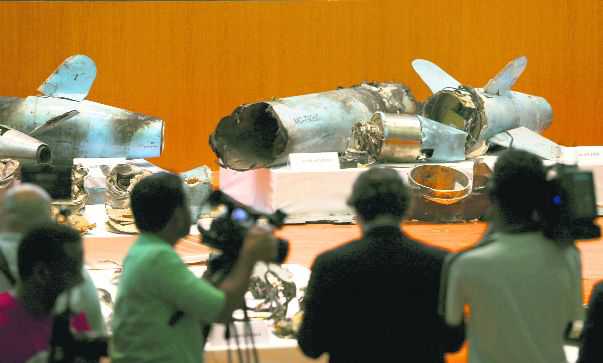 Remains of the missiles used to attack an Aramco oil facility are displayed in Riyadh, Saudi Arabia, on Wednesday. Reuters

US President Donald Trump on Wednesday said he ordered a major increase in sanctions on Iran as Saudi Arabia displayed remnants of drones and missiles it said Tehran used in a crippling weekend attack on its oil facilities.

Trump gave no explanation in a brief Twitter posting announcing the order, but the initiative follows repeated US assertions that the Islamic Republic was behind Saturday’s attack on the kingdom, a close US ally.

“I have just instructed the Secretary of the Treasury to substantially increase sanctions on the country of Iran!” he wrote. Iran, however, again denied involvement in the September 14 raids, which hit the world’s biggest crude processing facility and initially knocked out half of Saudi production.

“We don’t want conflict in the region ... Who started the conflict?” he added, blaming Washington and its Gulf allies for the war in Yemen.

However, the Saudi Defence Ministry held a news conference, displaying drone and missile debris it said was “undeniable” evidence of Iranian aggression. A total of 25 drones and missiles were used in the attacks launched from Iran not Yemen, the ministry spokesman added.

US Secretary of State Mike Pompeo was to meet Prince Mohammed in Jeddah on Wednesday to discuss the crisis before heading to the United Arab Emirates. — Reuters