Protest over citizenship for Rohingyas

SITTWE:Hundreds of hard-line Buddhists in a Myanmar state wracked by religious violence protested today against the government’s plan to give citizenship to some members of the persecuted Rohingya Muslim minority community. 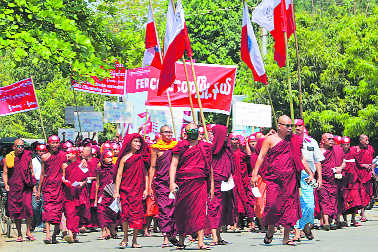 Monks protest against the citizenship for Rohingyas in Sittwe township in Myanmar on Sunday. AFP

Hundreds of hard-line Buddhists in a Myanmar state wracked by religious violence protested today against the government’s plan to give citizenship to some members of the persecuted Rohingya Muslim minority community.

Rakhine state’s dominant Arakan National Party led the protest in Sittwe, the state capital, where many Rohingya lived before an outbreak of inter-communal violence in 2012 forced them to flee their homes.

“We also look at the question of citizenship, and we also call for all those who have been recognised as citizens to have all the rights attached to that citizenship,” Ghassan Salame, a member of the commission, said last week. Myanmar’s new civilian government, led by Aung San Suu Kyi, welcomed the commission’s proposal. — AP

Outsiders in own country