ABU DHABI:US Secretary of State Mike Pompeo on Thursday said he preferred a “peaceful resolution” to a crisis sparked by attacks on Saudi oil infrastructure, as Iran warned against “all-out war”. 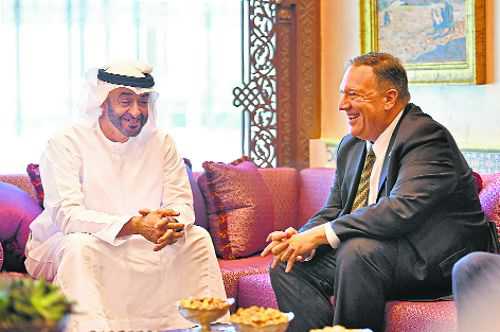 US Secretary of State Mike Pompeo on Thursday said he preferred a “peaceful resolution” to a crisis sparked by attacks on Saudi oil infrastructure, as Iran warned against “all-out war”.

Pompeo has blamed Iran for the weekend assault on two facilities which wiped out half of the Saudi oil production, dismissing its denials and condemning the “act of war”.

The rhetoric has raised the risk of an unpredictable escalation in the tinderbox region where Saudi Arabia and Iran are locked in a decades-old struggle for dominance.

Visiting the United Arab Emirates, Pompeo, however, said his country would prefer a “peaceful” solution to the crisis. “We’d like a peaceful resolution,” he said. “I hope the Islamic Republic of Iran sees it the same way,” he said after talks with the leaders of the UAE.

Iran’s Foreign Minister Mohammad Javad Zarif earlier warned any US or Saudi military strike on Iran could cause “all-out war”. “We don’t want war, we don’t want to engage in a military confrontation,” he said in an interview aired on Thursday. “But we won’t blink to defend our territory” he added.

Pompeo arrived in Abu Dhabi from the Saudi city of Jeddah, where late Wednesday he met Crown Prince Mohammed bin Salman, the kingdom’s de-facto ruler who has said the assault poses a “real test” of global will.

The two sides agreed “the Iranian regime must be held accountable for its continued aggressive, reckless, and threatening behaviour”, State Department spokeswoman Morgan Ortagus said. “The attack not only threatened Saudi Arabian national security, but also endangered the lives of all the American citizens living and working in Saudi Arabia”, she added. — AFP

Any US or Saudi military strike against Iran would bring ‘all-out war’, Tehran said on Thursday, keeping up a drumbeat of warnings to its adversaries

“I am making a very serious statement that we don’t want war; we don’t want to engage in a military confrontation ... But we won’t blink to defend our territory,” Iranian Foreign Minister Mohammed Javad Zarif.