Trump’s ‘Salute to America’ showcases military might : The Tribune India

WASHINGTON:Declaring that “nothing is impossible” for Americans, President Donald Trump celebrated the Independence Day with an unprecedented display of the country’s military might at a rain-soaked parade but surprised his critics with a speech that was devoid of his trademark political rhetoric, ahead of his 2020 re-election bid. 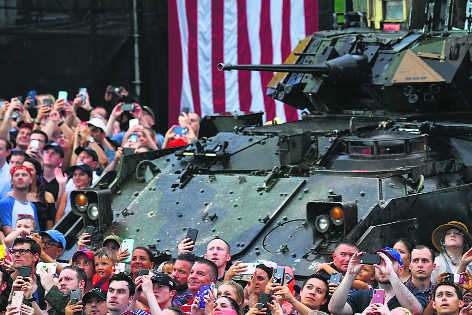 Crowds take images of the flyover at US President Donald Trump’s ‘Salute to America’ event. AFP

Declaring that “nothing is impossible” for Americans, President Donald Trump celebrated the Independence Day with an unprecedented display of the country’s military might at a rain-soaked parade but surprised his critics with a speech that was devoid of his trademark political rhetoric, ahead of his 2020 re-election bid.

In one of the least polarising speeches of his presidency, Trump paid tribute to America’s armed forces at a July Fourth appearance before the Lincoln Memorial in Washington that was held amid criticism that the Commander-in-Chief was politicising America’s Independence Day celebrations.

As the Abrams tanks rumbled, fighter aircraft, including a B-2 bomber and a pair of F-35 warplanes roared overhead and the jumbo jet used as Air Force One performed a rare flyover over the National Mall, Trump said: “For Americans, nothing is impossible.”

“Our nation is stronger today than it ever was before,” he said and emphasised that the country’s future “rests on the shoulders of men and women willing to defend it.”

“As long as we stay true to our cause, as long as we remember our great history and as long as we never stop fighting for a better future, then there will be nothing that America cannot do,” he asserted in his ‘Salute to America’ address.

“We will always be the people who defeated a tyrant, crossed a continent, harnessed science, took to the skies, and soared into the heavens, because we will never forget that we are Americans, and the future belongs to us.”

Joined by First Lady Melania Trump, Vice President Mike Pence, his cabinet colleagues and top military leadership, Trump said it was an occasion to salute the US soldiers.

“Today we come together as one nation. With this very special salute to America. We celebrate our history by people, and the heroes who proudly defend our flag, the brave men and women of the US military,” he said in his speech. Trump said the same American spirit that emboldened the country’s founders has kept its people strong throughout its history. He recalled the upcoming anniversary of the Apollo 11 moon landing.

Opposition Democratic leaders criticised Trump for what they alleged politicisation of the Independence Day ahead of next year’s presidential race. Trump has already announced that he would be the Republican Party’s candidate while 23 Democrats are vying for the nomination. — PTI

First US Prez in 70 years to deliver I-Day address