ANKARA: Turkey on Monday urged the United States to reverse a decision to halt the issuing of all regular visas at American consulates in the country, in a row that risks a major crisis. 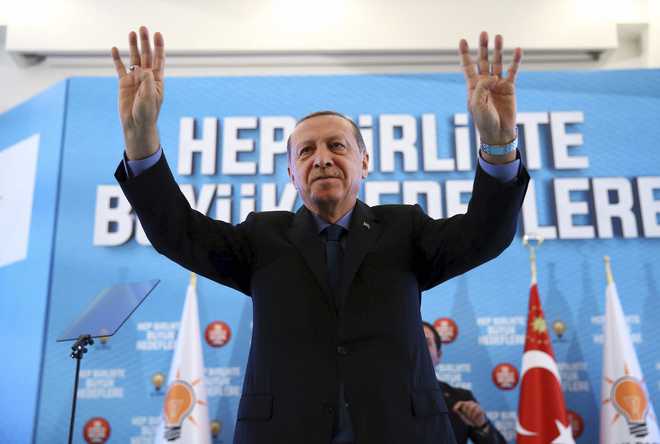 Turkey’s President Recep Tayyip Erdogan, waves to supporters after he delivered a speech at his ruling political party’s conference in Afyonkarahisar province in western Turkey, on October 8, 2017. AP/PTI photo

Turkey on Monday urged the United States to reverse a decision to halt the issuing of all regular visas at American consulates in the country, in a row that risks a major crisis.

Ankara hit back at the US move — sparked by the arrest of an Istanbul consulate staffer — with a similar halt by Turkey's missions in the US.

Analysts warned the dispute risked becoming the most serious row between the two NATO allies in decades.

The Turkish foreign ministry summoned the US embassy's deputy chief of mission on Monday, urging Washington to reverse its decision to suspend all non-immigrant visa services.

The US embassy in Ankara said on Sunday it would suspend issuing visas for tourism, medical treatment, business, temporary work or study, after the arrest last week.

Immigrant visa services are only for those seeking to live in the United States permanently.

The embassy said "recent events" forced the US government to reassess Turkey's "commitment" to the security of US mission services and personnel in the country.

Last week an Istanbul court remanded in custody the consulate employee over accusations of links to the group of US-based Muslim preacher Fethullah Gulen who Ankara blames for the 2016 failed coup.

He has been formally charged with espionage and seeking to overthrow the Turkish government, accusations the embassy rejected as "wholly without merit".

Ankara countered Washington's visa move with further restrictive measures, stopping services applying to visas in passports as well as e-visas and visas acquired at the border as well as those issued at diplomatic facilities in the US.

The Turkish embassy in Washington issued two almost word-for-word copies of the American statement in English and Turkish, in an apparent attempt to mock the American counterpart.

"It's definitely a historic low in ties, at least in recent memory," said Soner Cagaptay, director of the Turkish Research Program at The Washington Institute, adding that the last such dispute of this magnitude was after the 1974 Turkish invasion of Cyprus.

"Neither side is willing to step back," he said.

Last week's developments also came after a Turkish employee at the US consulate in the southern city of Adana was arrested in March on charges of supporting the Kurdistan Workers Party (PKK).

The Hurriyet daily said Turkish authorities issued an arrest warrant for a third US consulate staffer who is now hiding inside the consulate.

However in an interview with A Haber television Justice Minister Abdulhamit Gul denied the claim, saying he was unaware of any new arrest warrant.

Turkish officials had expressed hope of a new page in Ankara-Washington relations under President Donald Trump and pressed Washington for the extradition of the Pennsylvania-based Gulen, who denies any link to the coup bid.

The lack of movement on the issue has further strained ties already fraying over Washington's support for a Syrian Kurdish militia Ankara deems to be a terror group.

Meanwhile, members of Erdogan's security detail were indicted by US authorities after clashes with protesters during an official visit this year, infuriating the Turkish president.

American pastor Andrew Brunson, who ran a church in the western city of Izmir, has been held by Turkish authorities since October 2016 on charges of being a member of Gulen's group.

Erdogan suggested last month that Turkey could release him in exchange for Gulen but Washington showed little interest in the proposal.

"It will be hard for relations to be restored any time soon to what they used to be," said Cagaptay.

Turkey's influential Industrialists' and Businessman's Association (TUSIAD) described the move by the US as "most unfortunate" saying it risked hurting citizens who had nothing to do with the row.

The tensions put pressure on the Turkish lira, which lost 2.3 per cent against the US dollar, recovering slightly after losing over six percent at one point.

"There could be a temporary impact because of geopolitical concerns, we are watching closely," Murat Uysal said, quoted by NTV broadcaster. — AFP