CARACAS: Venezuela''s attorney-general confirmed on Friday that 12 people have died during opposition protests. 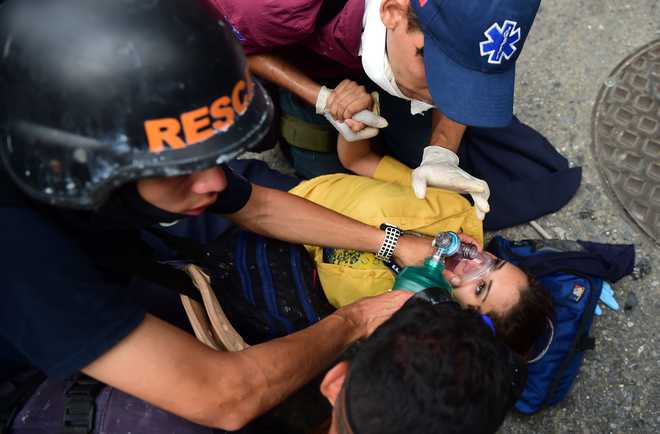 Rescue workers assist a woman after clashes with the riot police during a protest against Venezuelan President Nicolas Maduro, in Caracas on April 20, 2017.AFP

Venezuela's attorney-general confirmed on Friday that 12 people have died during opposition protests.

Eleven people had died during violence and looting on Thursday night and Friday morning in the capital of Caracas, Xinhua news agency reported.

However, another death was then registered on Friday in the town of Petare of the state of Miranda, east of the capital, bringing the number of deaths to 12 since Thursday. A total of 15 have died since April 19.

During clashes in Caracas, six other people were injured, bringing the total number of wounded to 68.

According to the authorities, eight of the victims were electrocuted to death when they came into contact with a high-voltage cable during the looting of a bakery.

Another was reported to be a shopkeeper who was shot dead while trying to defend his store, according to preliminary reports.

The attorney-general has ordered a team of five prosecutors to investigate the 12 deaths.

Venezuela has been convulsed by protests between supporters of President Nicolas Maduro and opponents who blame him for the country's ongoing political and economic crisis.

Speaking Friday to the press, Venezuela's vice-president, Tareck El Aissami, said that the right-wing opposition was continuing to try and overthrow the government by stoking the violence.

"The right is full of hate. They are organising a new spiral of terrorism plotting with criminal delinquents, and they are using criminal gangs to attack our humble people," he said.