Widespread condemnation for hate crime against US Sikh

WASHINGTON: Several organisations and individuals have strongly condemned the brutal assault on an elderly Sikh man in Chicago, calling for hate crime charges to be brought against the perpetrator. 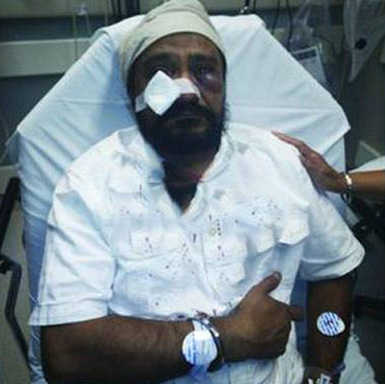 Several organisations and individuals have strongly condemned the brutal assault on an elderly Sikh man in Chicago, calling for hate crime charges to be brought against the perpetrator.

In their joint statement, the three organisations commended the authorities for their quick response in apprehending the suspect and for their decision to investigate the violent attack as a hate crime.

On September 8, Inderjit Singh Mukker, a Sikh-American resident in the Darien suburb of Chicago, was viciously assaulted and left with severe facial injuries after an assailant pulled up to his car yelling racial slurs, including, "Terrorist, go back to your country, Bin Laden!"

The Chicago office of the Council on American-Islamic Relations (CAIR-Chicago), in a statement, called for hate crime charges to be brought against the alleged perpetrator of the attack.

"This heinous and brutal attack against Mr Mukker for no other reason than his religious appearance is not only a violation of his human sanctity or that of the Sikh community, but that of all Americans and every person of conscience. It is in fact an attack against America. We call on authorities to charge this regrettable incident as a hate crime," CAIR-Chicago Executive Director Ahmed Rehab said.

"We vow to redouble our efforts to challenge the hate and mis-perception that continue to make such senseless acts possible," he added.

The Sikh Coalition, CAIR-Chicago, South Asian American Research and Policy Institute (SAAPRI), Arab American Action Network (AAAN), and Chicago Lawyers' Committee for Civil Rights also called for a full hate crime investigation by the police and the FBI and for hate crime charges to be brought.

NAPA executive director, Satnam Singh Chahal, said the attack which took place on the eve of 9/11, is a serious concern.

"It is sad that the attack on a Sikh in Chicago is not for the first time that such an incident has taken place. People misunderstand us as terrorists because of our outlook," Chahal said, urging Prime Minister Narendra Modi to raise the issue during his US visit. —PTI