Armenian alphabet, and the man who designed it

Mesrop Mashtots, a priest, laid out the structure of the Armenian alphabet around the religion of the people. The country still remembers him 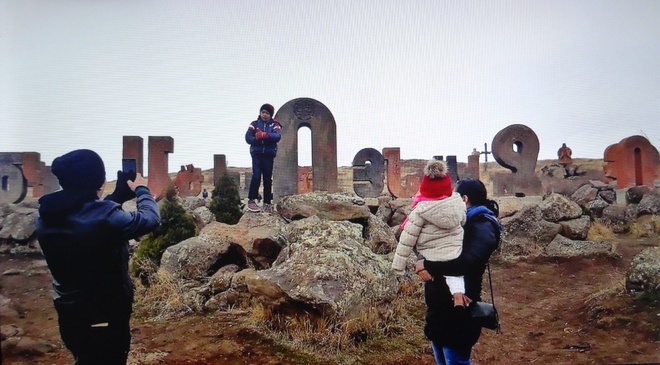 In letter and spirit: A family’s visit to the Alphabet Monument. Young boy having himself photographed standing close to the first letter of his own name.

What do we — I mean what does the average Indian — know about Armenia? Virtually nothing, would be my guess. Most of us might even have problems locating it on the map of the world, even of the Near East. When studying history at the University, I recall, we did read a paragraph about the ‘Armenian Massacres’ as a part of the general chapters on what used to be called ‘The Eastern Question’ — the struggle between great European powers following the collapse of the once great Ottoman empire of Turkey — but the whole thing was for us just an abstraction, as it were.

And yet, this small country, ‘land of rugged mountains and extinct volcanoes’ — greatly reduced from what it used to be once, when it was ‘one of the most powerful in all of Asia in the ancient world’; and now ‘a fraction of the size of ancient Armenia’ — has a history and a culture that is singularly fascinating. And tragic, at the same time. Stretching from the Caspian to the Mediterranean Seas once, it became subject to waves of invasions by a succession of neighbouring empires. It was conquered by Greeks, Romans, Persians, Byzantines, Mongols, Arabs, Ottoman Turks, Russians. It was the Ottoman Turks, however, who, from the 16th century onwards, grasped it from the neck as it were and bludgeoned it into submission. In the 19th century, their grip started loosening in general, as one reads, but Armenia continued to suffer under Turkish domination. One can judge this from what I have referred to above: the great Armenian Massacre — designated later as the first genocide of the 20th century — which dates back to 1915, when the Turks ordered the deportation of Armenians to the deserts of Syria and Mesopotamia. Stories of untold misery have come down. Estimates vary but it is generally believed that between 6,00,000 and 1.5 million Armenians were murdered, raped, or died of starvation. There is a stunning statistic at hand: 10 million Armenians live outside of Armenia today, which is three times the total population of Armenia.

Against this tragic backdrop, consider some facts about the country. Armenia — the ancient name is Hayk — finds mention several times in the Bible, especially with reference to Mount Ararat, which tradition identifies as the mountain that Noah’s ark rested on after the flood. It was not Rome under Constantine the Great but Armenia which was the first country in the world to officially embrace Christianity as its religion.This was in ca. 300 CE; Armenia has stayed almost wholly Christian since then. There have been some remarkable figures that Armenia has produced in the past: bankers, collectors of art, entrepreneurs. But even if one simply puts together a list of Armenians who, in our own day and age, have achieved not only prominence, even stardom, but impacted their fields, the list is truly impressive. Consider, for instance: Andre Agassi, tennis icon; Arshile Gorky, abstract expressionist painter; Gary Kasparov, chess player; Cher, singer and entertainer; Kevorkian, distinguished art collector; Gulbenkian, legendaryphilanthropist; Khachaturian, renowned music composer. And all this, without counting that habitual eyeballs-grabber, Kim Kardashian, reality TV star and socialite.

There is this desire among Armenians to stand out and be, somehow, different. It is as if under the constant threat of being submergedand swept aside, or pushed into obscurity,‘Armenians became both cosmopolitan as well as fierce protectors of their culture and tradition’, as an official website puts it. Identity was a matter of concern. An early but significant manifestation of this is the manner in which they celebrate the uniqueness of their script, for instance: essentially what I write to draw attention to here. This script was invented in the 5th century — the year often cited is 405 CE — and everyone mentions the name of its inventor with great respect: Mesrop Mashtots. Mesrop, a priest, engaged in preaching the Gospel, sensed a problem while dealing with his flock, for the scripts, if they knew any — Greek, Persian or Syriac — could not adequately express the language they spoke. The Word of God could not be suitably communicated, in other words. He therefore set about inventing a national alphabet. Supported by royalty he spent a great deal of time doing this, leaning naturally upon the scripts that he knew — Pehlavi, Aramaic, Avestan or Greek — but going beyond them. In the end he came up with a script, the letters of the alphabet of which were unique. He laid out the structure of the alphabet around the religion of the people. He made the first letter ‘A’, which was the first letter in the word Astvats, or God, and the last letter ‘K’, with which the name of K’ristos — Christ in other words — begins. There were 36 letters in his alphabet to which, many centuries later, two more were added, and now it has 31 consonants and 7 vowels. But, in its essence, the Armenian alphabet is recognised as the work of Mesrop Mashtot. His is a name celebrated throughout the Armenian world: every child ‘knows’ him; the Armenian Apostolic Church uses his alphabet; the literature of Armenia constantly mentions him; statues representing him have been raised at place after place. He is an icon. His alphabet has served as a means of stabilising and formalising Armenian speech; it is always spoken of as having ‘facilitated the unity of the Armenian nation and church’.

Not too many footnotes survive. But a spectacular footnote to the invention of the Armenian alphabet, raised just fifteen years ago, might defy the ravages of time. In 2005, after sixteen hundred years had elapsed, an Armenian architect, J. Torosyan, took each letter of the alphabet, carved them on a giant scale, and erected them in an open rocky space not far from the capital city of Yerevan. It is the final resting place of Mesrop Mashtot. The stone out of which the letters were carved is the Armenian tuff: soft rock that emerged from volcanic ash billions of years ago.The great Mount Aragats looms in the background.

Not many — Armenians or others — who come visiting the country turn back without visiting this majestic monument. Not many at the same time know that Armenian letters have been inscribed by Unesco in the Representative List of Intangible Cultural Heritage of Humanity.

Do we know of anything comparable, anywhere else?