Apart from painting, Gurpreet has also spearheaded and organised protests and march in support of the farmers against the three farm laws 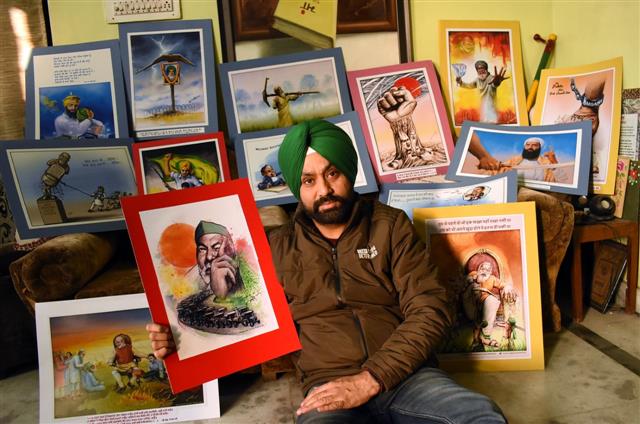 Gurpreet Artist with a few of his paintings at Bathinda. Tribune photo: Pawan Sharma

An artist from Bathinda, Gurpreet Artist, has made around 60 paintings in support of farmers protest against the farm laws and all of his paintings are a hit on social media.

Gurpreet has made the paintings to highlight how the three legislations will crush the farmers in future.

His two latest paintings on journalist Ravish Kumar and BKU leader Rakesh Tikait, has got reach in lakhs.

He has also made humorous paintings depicting Diljit Dosanjh and Kangana Ranaut tussle.

From day one of farmers’ agitation, he had made painting on the issues of farmers when they came from Punjab and reached Delhi borders braving water cannons, tear gas and crossing various barricading in Haryana.

Gurpreet Artist said, “I am a social activist; I use paint and brush to highlight the social issues. Art is a visual medium and it has power. I feel as if due to the effort of social media and art, people have started getting attached to the farmers’ issue.”

Talking to The Tribune about a particular painting on Ravish Kumar, he said, “At a time, when the entire national media is reporting against the farmers, one journalist is standing by the farmers by showing reality at the ground level, definitely needs motivation and applaud from everyone.”

He has made a painting on Rakesh Tikait showing his tears which lifted the spirit of entire farmers’ agitation, he said.

“Rakesh Tikait changed the course of the entire agitation after it was felt that agitation might get over at Ghazipur after January 26 incident, but his stand and tears, lifted spirit of agitation amongst the farmers from Uttar Pradesh, Haryana and Punjab, who during night time only started moving towards Delhi.”

He said on the night of January 27 only, he made this painting at 2 am and when he posted on social media, within no time it was a hit on social media.

Apart from painting, Gurpreet has also spearheaded and organised protests and march in support of the farmers against the three farm laws.

His protests have witness huge participation of the public in the city.

Even he had spent around 20 days at farmers’ protests at Tikri and Singhu border in Delhi.

He also held an exhibition of his paintings at Singhu border, which attracted a good response.