Battle of Stalingrad and Vasily Grossman’s novel that was arrested

Described as ‘one of the greatest books ever’, Vasily Grossman’s ‘Life and Fate’ was judged so dangerous in the Soviet Union that not only its manuscript, but even the ribbons on which it had been typed were confiscated by the state 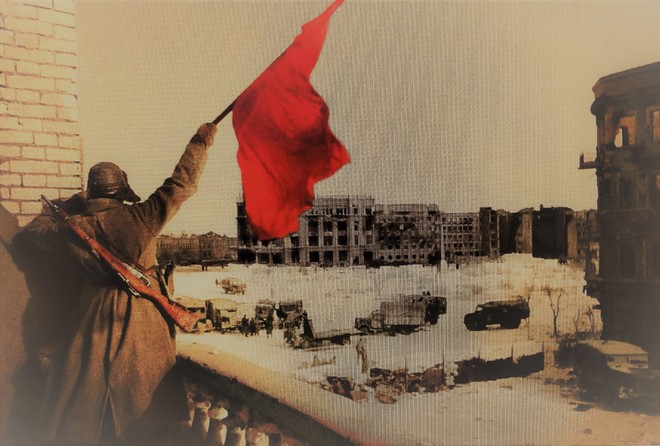 A soldier waving the victorious Red Flag at the end of the battle.

It (the Battle of Stalingrad) was a storm that had flung open every door in Russia, that had driven people out of their warm homes and onto black autumn roads, sparing neither peaceful city apartments, nor village huts, nor hamlets deep in the forest… — from a description of Russia in 1942-43

It is not enough to say, “I wrote the truth.” The author should ask himself two questions: “First, which truth? And second, why?” We know there are two truths and that, in our world, it is the vile and dirty truth… that preponderates. — Grossman

I know that I simply do not have the title to write on it, for I have not yet read the book — only ordered it — but the temptation is far too strong. For, I find myself virtually numbed by reading what others have written on it. I write here thus not on‘Life and Fate’ but about it. And this, because Vasily Grossman, its writer, has been called, repeatedly, the ‘Leo Tolstoy of the USSR’, and his book described as ‘one of the greatest books of the 20th century’… in fact, ‘one of the greatest books ever’. This was a book judged so dangerous in the Soviet Union that not only its manuscript, but even the ribbons on which it had been typed were confiscated by the state. It is an epic tale, located in the period of World War II, that engages profoundly with the dark forces that dominated the 20th century: the fascism of Hitler’s Germany on the one hand, and the Soviet communism of Stalin on the other.

To place his work, briefly, in the present context: Vasily Grossman was born in 1905 in a Jewish family in Ukraine, then a part of Czarist Russia. On growing up and taking up different jobs, at the age of 25 or so he took to writing as a career, publishing short stories and novels. When the war broke out in 1939, he was appointed as a war correspondent with the Soviet army by a newspaper, and it is from the field of battle that he wrote about what was happening on the ground: in reports that felt as if written with grit between his toes, sand in his mouth, and acrid smoke in his nostrils. As he watched the progress of what has been sometimes described as ‘the greatest battle in human history’ — the Battle of Stalingrad in which every town, every village, every street, every single home was fought over — he had the opportunity to observe the devastation that evil systems operating on both sides under the eyes of two ruthless dictators, Hitler and Stalin, thrive on. During those years, he learnt of his own mother being marched off to her death in a village that the invading German army had captured, and saw with his own eyes Treblinka, the unspeakably inhuman extermination camp that the Nazis had run — there were accounts of horrors like children being torn in half, men’s skulls being crushed by hammers — and wrote later what is regarded as the earliest account of a Nazi death camp by a reporter. But equally, he saw the repression in his own land, diktats issued against the peasants by the Soviet overlords, and learnt about grain procurement campaigns which involved peasants, along with their children, to be put to death by starvation.

Out of all these experiences, and his own struggle with beliefs, but also with his undying faith in humanity, emerged, after the war had ended, writings that could shake every conscience. Grossman had always had problems with censorship but when he approached for permission to publish these works, he was plainly told by Suslov, the Communist Party’s chief ideologist, that his book (‘Life and Fate’) could not be published ‘for two or three hundred years’, for it contained harsh comments on the Soviet system. “Why should we publish your book,” Suslov told him, “and begin a public discussion as to whether anyone needs the Soviet Union or not? Why should we add your book to the atomic bombs that our enemies are preparing to launch against us?” The KGB raided Grossman’s flat, seized manuscripts and notes, even the typewriter ribbon on which the text had been written. Grossman himself was never arrested, however. When the atmosphere in Soviet Russia began to change a bit, he tried again, and wrote to Nikita Khrushchev: “What is the point of me being physically free when the book I dedicated my life to is arrested... I am not renouncing it... I am requesting freedom for my book.” But all he kept hearing from the authorities was ‘No’. “It would have been better if they had killed me,” Grossman later told his daughter. He died in 1964.

But the book still got published: how, is another story. Now it is available, having been translated in every conceivable language. This because, as someone wrote: “Vasily Grossman had fashioned an immense, intricately detailed tapestry depicting a time of almost unimaginable horror, and even stranger hope. ‘Life and Fate’ juxtaposes bedrooms and snipers’ nests, scientific laboratories and the Gulag, taking us deep into the hearts and minds of characters ranging from a boy on his way to the gas chambers to Hitler and Stalin themselves.” The book, apart from being a great story with a family at its centre, is ‘a considered statement of Grossman’s moral and political philosophy — a meditation on the nature of totalitarianism, the danger presented by even the most seemingly benign of ideologies, and the moral responsibility of each individual for his own actions’.

But, in fairness, should not one hear, at the end of this little piece, Grossman’s own voice? “…the time has now come for us writers,” he said once, “to shoulder our responsibility. Do we understand the magnitude of this noble and far from simple task? Do we understand that it is we who, more resolutely than anyone, must now enter into battle against the forces of forgetfulness, against the slow and implacable flow of the river of time?” And listen to the questions he asks in his work: “Does human nature undergo a true change in the cauldron of totalitarian violence? Does man lose his innate yearning for freedom?”