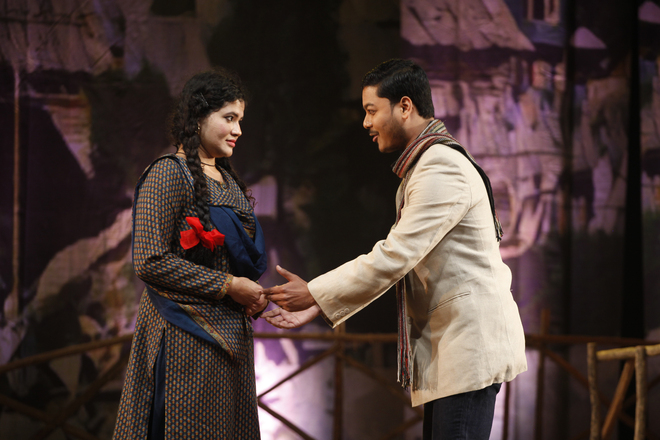 The National School of Drama, New Delhi, will stage three plays by eminent drama ensembles from February 22 to 24 at Tagore Theatre. Vinod Kable, secretary, culture and Sorab Arora, director, say, “While the performances will delight the audience, Chandigarh drama practitioners too will have the opportunity to learn and imbibe the best of theatrical nuances from the works of three legendary artistes, who will be presenting their plays during the fest.” Here is the schedule of performances.

An adaptation of Mahashweta Devi’s classic Bayen by Usha Ganguli, the play depicts the secondary status given to women in the male dominated society. The story revolves around the life of Chandidasi, who becomes the care taker of the graves in her village. She has a deep affection for the daughter of her sister-in-law, who is buried in the graveyard. Out of affection, she takes out the body of the child that leads everyone to label her as a witch (bayen). Chandidasi is tortured mentally and punished. However, she finally sacrifices her life to save others.

Usha Ganguli has received a number of honours for direction and acting, including awards from the Government of West Bengal (1982, 1985) Uttar Pradesh Sangeet Natak Akademi Award (1998) and

Sangeet Natak Akademi Award for her contribution to Indian theatre as a director.

Jaat Hi Poochho Sadhu Ki is a satire on education policy, system, caste prejudices and nepotism. Written by Vijay Tendulkar in Marathi and translated by Vasant Dev, the play revolves around the life of Mahipat Babhruvahan, who hailing from a village, works hard and acquires the qualification for the job of a lecturer in a college but his caste becomes a stumbling block. Highly accomplished thespian Rajinder Nath was the director of Shri Ram Centre of Art and Culture. He is the founder editor of Theatre India.

The festival will conclude with the staging of Khamoshi Sili Sili by the Repertory of National School of Drama (NSD), New Delhi under the direction of Suresh Sharma, director of the repertory. This play is a translation and adaptation of Fiddler on the Roof, written by Joseph Stein. It is a musical, which is based on the Kashmiri Pandits.

Suresh Sharma has acted in more than 30 plays and with almost all the eminent directors in the country.

All performances start at 6.30 pm