Amritsar restorer claims to be the ‘creator’ of iconic artwork 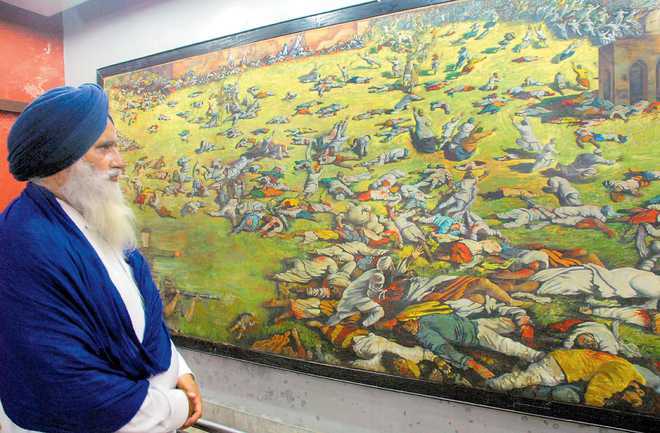 A controversy has erupted over the iconic Jallianwala Bagh painting as a local artist from Amritsar has claimed that it is his creation.

The painting was one of the masterpieces of eminent artist Jaswant Singh and was selected by civil servant Dr MS Randhawa from various entries.

Going by the posts on his Facebook account and web page, Atul Mehra, an artist from Amritsar, who presently heads one of the oldest schools of painting — the Indian Academy of Fine Arts in Amritsar — claimed “noteworthy paintings can be found at the Jallianwala Bagh Memorial in Amritsar. The 17.5-foot-long canvas depicts the stark reality of the Jallianwala Bagh massacre.The vivid portrayal of General Dyer’s men shooting every Indian at sight wrenches the heart of every visitor to the memorial even today”.

It is a moral and legal offence to copy a dead painter’s work, present it as your own and put it at the same public place where the original has been placed. — Harinder Singh, Jaswant Singh’s son

The claims made by Mehra have left Jaswant Singh’s Delhi-based son Harinder Singh and daughter-in-law Aparna Caur in shock.

“The painting was commissioned to my father by Dr MS Randhawa. Atul Mehra is blatantly bragging on Facebook that it is his painting. This is shameful on his part and also for the Punjab and the Central Government to allow such a malicious campaign. This is my father’s copyright because he is the creator of the painting,” Harinder said.

He said the plaque displayed at the entrance for many years was written by Dr Randhawa in which one could see the creator’s name. “It is a moral and legal offence to copy a dead painter’s work, present it as your own and put it at the same public place where the original has been placed,” he said. Mehra said the painting was damaged by termites. Decades back, on the request of Sukumar Mukherjee, he had repaired the damaged painting. But when questioned how he could claim it was his creation, Mehra said since he had restored the painting, he had the right to call himself as its creator.