Fading frescos, crumbling havelis of Rurka Kalan to get a new life 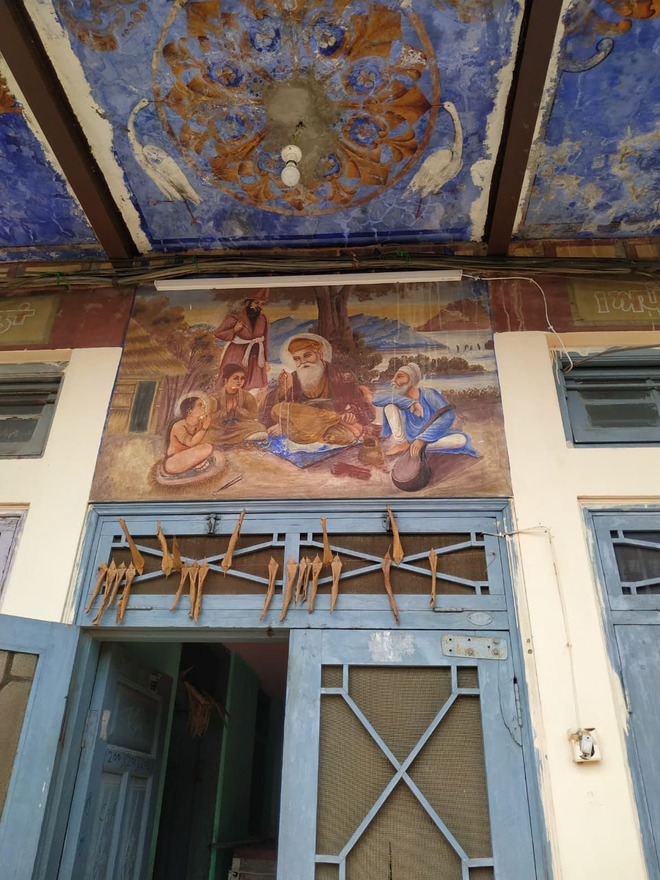 Village prepares for a heritage facelift A house built in 1962 in the village still bears frescos of Guru Nanak Dev.

Replete with old buildings, abandoned ornamental kothis and beautiful frescoed homes, the Rurka Kalan village is planning to preserve its legacy in order to get a facelift as a heritage village. The red bare-bricked structures emulated to look like old sarais (inns) and saths have already begun to give the village a vintage look. Five of the saths have already been constructed. In the evenings, they are lit up for effect.

In the heart of the village is a rare frescoed house which has survived the ravages of time. Built in 1962, the house as ornamental mesh (jali) walls with Guru Nanak and his disciple Bhai Mardana with a Rabab and Bhai Bala with a fan in their hands. Villagers say earlier, beautiful fairies were built on the roof, but the statues were demolished by one of the owners. What managed to survive are beautiful walls bearing frescos of Guru Nanak Dev with his disciples.

The fresco at the entrance bears Nanak with Bhai Mardana, a Hindu child ascetic and another disciple with folded hands and a Muslim follower looking on.

Further up in the village is a haveli which was built by Nathu Ram, a British patron who was rewarded with 100 fields, over 100 years ago. It is built in small bricks and a wrought iron flag on top of the entrance gate which villagers say is a weather vane. Another building built in 1937 called Relu da Chubara - is now used to store grains. It belonged to a Muslim family which left in 1947.

Gurmangal Dass, village resident and founder of Rurka Kalan’s Youth Footbal Club said, “Jalandhar had a lot of frescoed buildings. They defaced with time. The saths were an idea to save villagers from scroching heat and provide a place of rest and gathering. We have plans to save the village’s historical legacy and build it as a tourist village. We have at least two 300-year-old banyans. We have many old havelis. The Relu Da Chubara was built in 1937. The date is imprinted on its floor. All older buildings will be preserved. As many as 12 saths are being built. They are constructed out of raw bricks with a polish. The idea is to recreate the lost legacy of Punjab. The saths are already a hit with village folk.”

Gurmangal added, “An old pond of the village, which is also 100 years old will also be retained as a stadium. Its walls will be left as it is.”

Kulwinder Kaur, village sarpanch, said: “The glory of the erstwhile havelis is almost lost. People have built their homes over older structures. But we want to preserve whatever is left.”