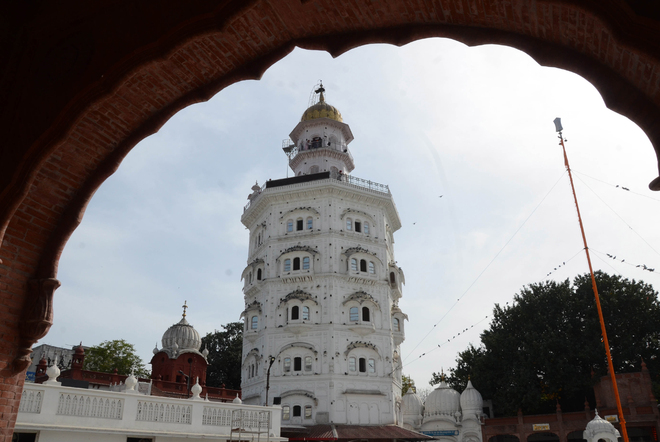 After receiving flak from various art and literary groups across the world, the Shiromani Gurdwara Parbandhak Committee (SGPC) has finally restored the murals displayed at the Gurdwara Baba Attal Rai, the 18th century tower on the Golden Temple premises.

There are a series of murals illustrating the life of Guru Nanak Dev based on Janamsakhi tradition. A major portion of the murals was damaged during kar sewa (restoration work) conducted by the SGPC in the ’90s. The bathroom tiles and plaster were installed on the ground floor of the tower.

Murals on the walls

Satpal Danish, eminent photographer, who published a book Janam Sakhi on the murals of Gurdwara Baba Atal Rai, claimed that originally the work has been done by several ‘Nakaashs’ in the Sikh raj. Names of a few Nakaashs including Matab Singh and Gian Singh are written there. However, several names of donors are also written on the walls, which reveals that the mural work on the first floor was conducted in 1902-03. It has been learnt that Gurmukhi text written on some of the murals is “Larivaar” (without space) while others are elaborated with modern Punjabi. The restoration of these painting might have been conducted in the 1902-03.

The interior walls of the first floor of the Gurdwara Baba Atal Rai have more than 40 panels of murals depicting the Janam Sakhi’s of Guru Nanak Dev. The series of Janam Sakhi is the biographical account of the life of the Guru and it has been painted beautifully on the walls.

There are two series of paintings, one representing Guru Nanak and other depicting Sikh martyrs of the 18th Century. The portraits of 18th Century martyrs Baba Deep Singh, Baba Naudh Singh, Baba Hanuman Singh and others are displayed in the inner galleries.

A number of murals at the ground floor have been considerably damaged. Several murals can be seen damaged at the deorhi or the first entrance to the shrine. Large panels illustrate scenes from the life of Baba Atal and Guru Nanak and various stages of the battle of Muktsar were damaged by the kar sewa (restoration work) conducted in the ’90s.

Gurdwara Baba Atal Rai, a nine-storeyed octagonal tower, standing 40-metre high, was built during Maharaja Ranjit Singh in memory of Baba Atal Rai, son of Guru Hargobind, the sixth Sikh master. It is situated to the south of the Golden Temple near Guru Ramdas library. It is one of the tallest buildings in Amritsar.

Initially, it was a small samadhi, (cenotaph), where the remains of Atal Rai were kept in 1620. Later, it transformed into a gurdwara. During Khalsa Raj, its nine-storey building was constructed to commemorate the nine years of Rai’s short life.

There is a large painting on the curves of the window, which depicts scenes from the Guru’s childhood. Three separate scenes depicting Guru Nanak at the age of 10, where his family is consulting about his future and deciding to send him with buffaloes. The pictures depict the “Sakhi” in which buffaloes grazed the crop of a Jatt (farmer) and he complained to Rai Bullar Bhatti, noble of Talwandi. Rai Bhullar summoned Nanak and his father. But when they visited the fields, the crop was blooming. 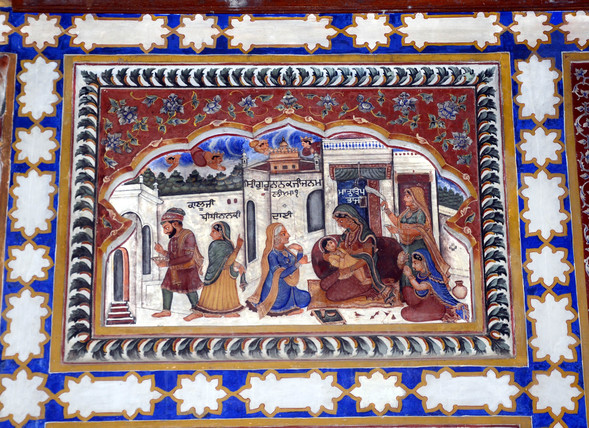 The series of murals starts from the birth of Guru Nanak Dev, the first Sikh master. As it is mentioned in the Janamsakhi literature, Guru Nanak is in lap of Mata Tripta ji. The caretaker Dai Daultan and two other servants are sitting along with the Guru’s mother. Father Kalu Ji (Mehta Kalyan Das) seems in a hurry to go outside to get required things and sister Bibi Nanaki is telling something to her father in a jovial mood. 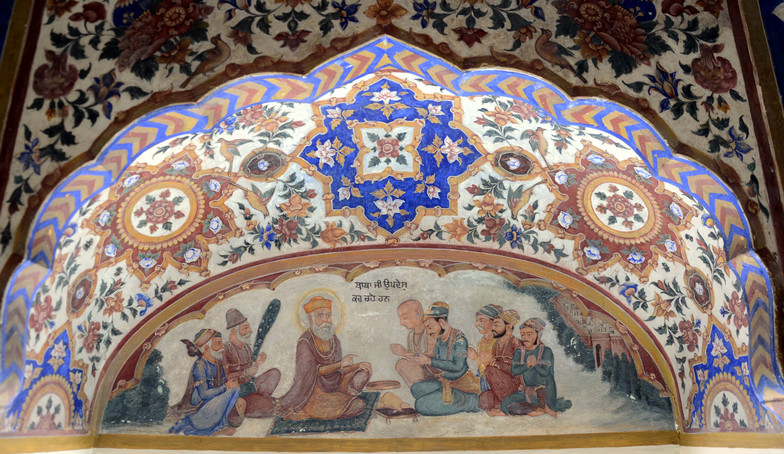 Guru Nanak spread his message around the world by recognising human race as one. In a picture, he is giving a message to people, where Hindus and Muslims are sitting together. Bala and Mardana are also with Guru Nanak Dev. 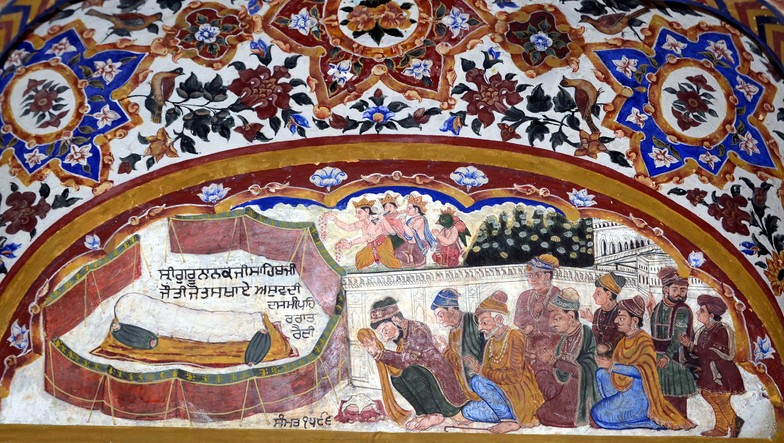 As per information, the Guru took a bed sheet and slept by saying goodbye to his devotees in 1539 and the God sprinkled flowers on the Guru’s body. 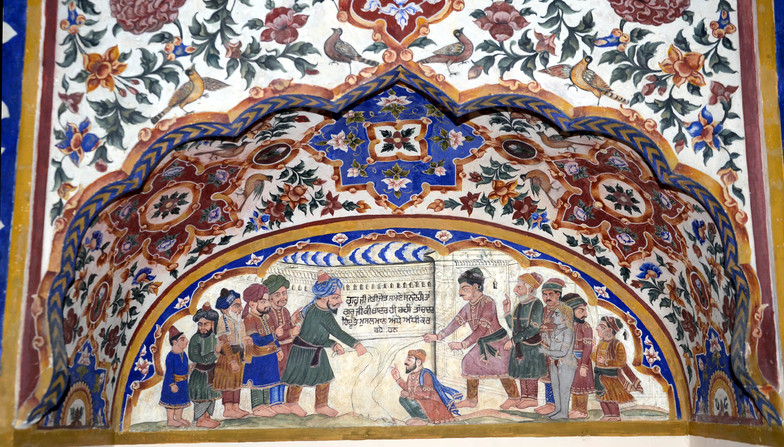 When Guru Nanak passed away, a conflict arose between his Hindu and Muslim devotees on how his last rites should be performed. When they put the bed sheet, they found only flowers. Hindus and Muslims tore the bed sheet. Hindus cremated it and Muslims buried the sheet. 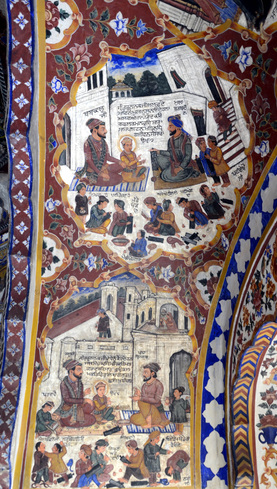 One of these murals, records a school scene, depicting Nanak, at the age of seven, commencing his education. Guru Nanak, along with his father, Baba Kalu, is seated in front of teacher Mulla Kutabdeen at the start of the first lesson. The young Nanak is seen explaining the meaning of the first letter to the mullah. Some of the pupils are waiting to show their phatti to the mullah, while others are either cleaning it or writing on it. A similar scene is visible at the school of Pandha Brij Nath, where the Guru is enlightening him about the path of God. 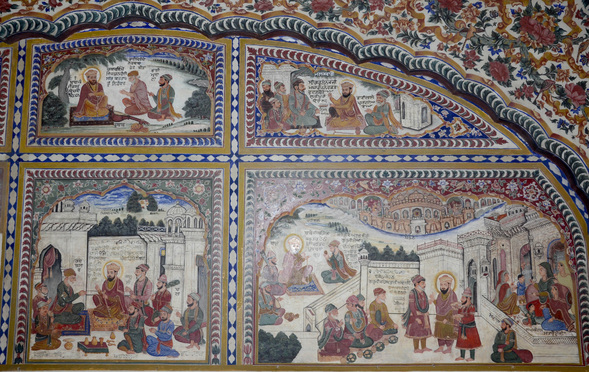 I. To spread his teachings and holy messages, the Guru started a journey called Udasis. Bhai Farinda, a rabab maker, presented a rabab to the Guru in jungle. Bahi Mardana was also siting with him, who was along with Guru Nanak throughout his journey.

II. Before leaving Talwandi, Guru Nanak met Rai Bhular Bhatti along with his father and uncle Lalu. He gave a message that everything was in the order of God. Rai Bhular bowed in front of the Guru.

IV. Karoria, a revenue collector met Guru outside the village and offered that he will construct a palace for him. The Guru asked to build Kartarpur on the name of Kartar (creator).

Like any ordinary marriage, sister Bebe Nanaki is feeding the mare after decorating it. The baraat (wedding procession) reached Vatala and a person is lighting the firecrackers to celebrate the arrival. The family of bride (Mata Sulakhni) is welcoming the baraat. Another mural in series shows Guru Nanak Dev sitting with baraatis and having food. The villagers are serving it. 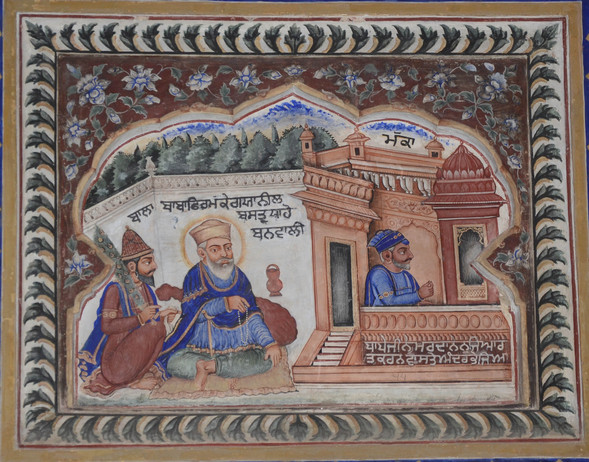 One of the murals depicts Guru Nanak sitting outside a shrine in Mecca by wearing a blue dress. Blue dresses used to be worn by hajjis or Muslims, who went on pilgrimage in those times. Bala is siting along with the Guru, while Bhai Mardana is entering inside the building. He is also wearing a blue dress. 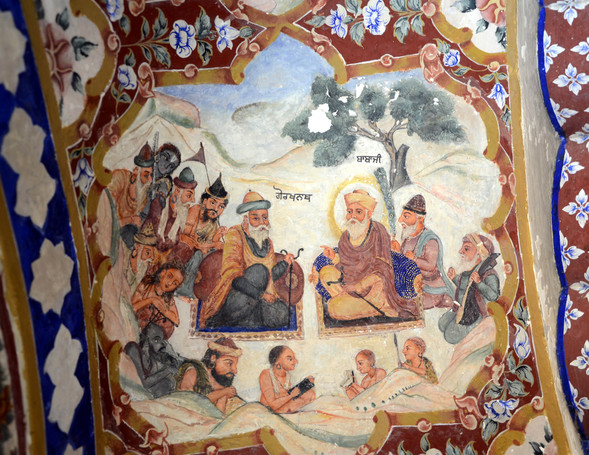 In this mural, Guru Nanak Dev is sitting along with Yogi Gorakhnath. His disciples were also there. According to Sakhis, the Guru had a long conversation with the head of Gorakhmata. 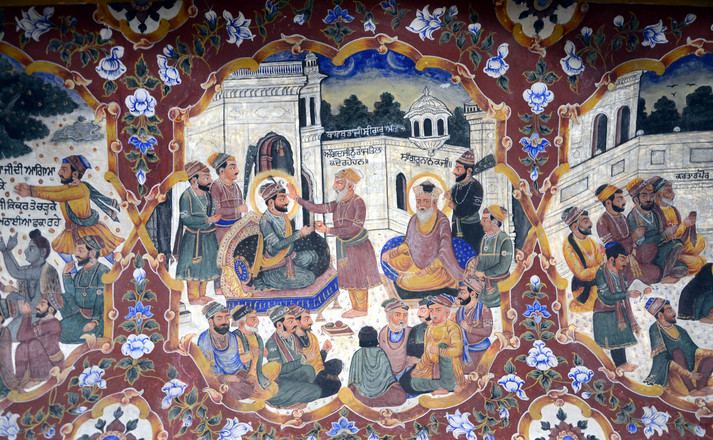 After travelling the world, the Guru returned to Kartarpur in 1521 and stayed here till the last. Second Guru Angad Dev met here and Guru gave Guruship to Bhai Lehana and gave him the name Guru Angad. The picture depicts the ceremony of applying tilak of Gurgadi.