How a flower led to architectural wonders 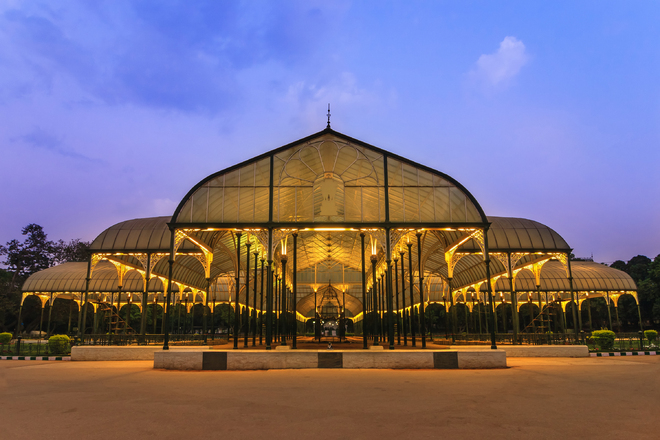 Glass House at Lalbagh; (R) underside of a leaf of the giant water lily

The leaves of Victoria amazonica (the giant water lily of the Plantae kingdom) are so strong that they can support the weight of a human… The most interesting thing about this flower is the large leaves that it creates. The leaves can grow up to 46 centimeters in size and can hold up to 136 kilograms: they are flat before growing rims at the edge. They are strong and stiff thanks to the strong bottom of the leaves. The bottoms are covered with spines to help support the ribs. — Katherine Festaryga

The Crystal Palace was a glass and cast-iron structure built in London, England, for the Great Exhibition of 1851. The building was designed by Sir Joseph Paxton, an architect and gardener, and revealed breakthroughs in architecture, construction, and design… The structure came to be regarded as the climax of early Victorian technology. In its design, Paxton employed timber, cast iron, wrought iron, and glass in a ridge-and-furrow system he had developed for greenhouses …

— Adapted from an article in  Encyclopaedia Britannica

Admittedly, the title promises an odd juxtaposition. But I am led to writing this piece by something I came upon in Vijay Thiruvady’s new book, ‘Lalbagh: Sultan’s Garden to Public Park’. His deep engagement in, and love for, one of the great botanical gardens of India shines through on every page, but I was specially intrigued by the connection he points out between an amazing plant from the world of nature and a man-made 19th century marvel of engineering and architecture. The context is provided by the sections in which he speaks of different structures in the much-loved Lalbagh of Bengaluru. Among the most distinguished of them is the Glass House, which, he says, owed a great deal to Sir Joseph Paxton’s innovative design of the magnificent Crystal Palace that he built to house the Great Exhibition. That design was, as everyone agrees, inspired, at least in part, by the ‘design’ — structure might be a more appropriate word — of the leaves of the giant water lily that this architect and botanist knew from having built glass houses in gardens earlier. 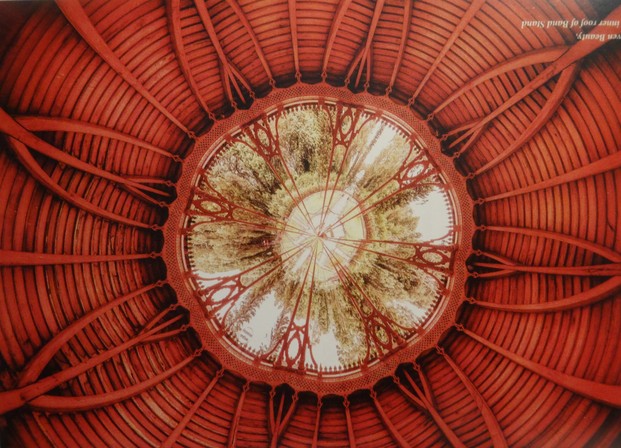 Not knowing much, anything in fact, about the giant water lily, I read up a bit on it. This ‘wonder of the vegetable kingdom’ has, apart from its size and structure, a fascinating history. It was originally a native of South America and the first time any European saw it was in 1837. Robert Schomburgk, a German-born British explorer, out to pursue geographical, ethnological and botanical studies in South America and the West Indies, was the one who saw it with wonderstruck eyes. So taken up was he, according to accounts, that he made up his mind to bring a specimen back to show it to the Royal Geographical Society in London. But the leaf was bigger than his canoe. Undaunted, as the account says, “He packed a bud and a small piece of leaf into a barrel full of salt water and set off back down the river to get his find onto the ship bound for England.” On the way, he decided to name the discovery after Princess Victoria, who had become Queen by the time he touched the shores of England again. Victoria amazonica was the name he had chosen. 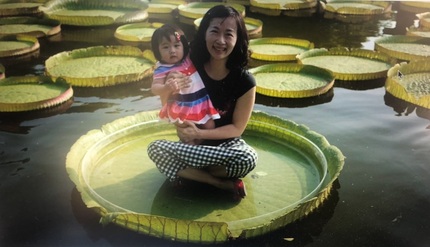 From this humble but wondrous green leaf to the Crystal Palace, with its space of 800,000 square feet, 1,000 iron columns and 84,000 square metres of glass, is a long way. But the path was cleared, and bridged, by Joseph Paxton who, as a botanist and keeper of gardens, had already built a big glass house for a Duke in Derbyshire. At that time, there were plans in England to build a massive structure that could house a great exhibition, with countries spread over the whole world participating; entries had been invited from architects and more than 200 had come in. But none was found suitable till Paxton came in — late, but bristling with new ideas — and claimed that he could raise the needed structure with minimal costs and in record time: not more than a few months. He created a module, based on his observation of the weight-bearing capacity of leaves of the water-lily: an intricate pattern of natural ribs and sharp spines in which air gets trapped to keep it afloat and buoyant. He said he could translate the network that nature had created into a design with glass and iron and demonstrated the weight-bearing possibility by getting his young daughter to lie down on an iron tray placed on a single leaf without harming herself or the leaf. It was sheer brilliance. He earned the contract; the enormous structure got built and was ready within five months through meticulous planning, involving pre-fabricated panels and welded ribs. When the Great Exhibition opened, it took everyone’s breath away. Ecstatic, the Queen wrote in her Journal: “This day is one of the greatest and most glorious of our lives…”

But to get back to Lalbagh and Bengaluru. The Crystal Palace was dismantled after the Great Exhibition and re-raised at another location on the outskirts of London from where also it disappeared because two massive fires brought it down. However, the memory of that structure survived even in India long after it was gone in England, and surfaced in Bengaluru when a few buildings were being raised/re-fashioned in that great garden. This was close to a hundred years back under the directions of the then Maharaja. The Glass House that was raised was much smaller compared to the Crystal Palace, of course, but, having been built using elements of the design of ‘the original’, it had a wonderful sense of floating lightness: airy and spacious, despite the fact that it used mild steel, tin sheets and wired glass in large quantities. The Glass House still stands, beckoning visitors, especially in the night, when it glows and shimmers.

When some years ago, the great British architect, Norman Foster, was asked, in the course of an interview, “If there was one building from the past that you could visit, what would it be?,” he thought for a moment and said: “It would be the Great Exhibition; it would be the Crystal Palace of Paxton.” One wonders if he would not have enjoyed seeing the Glass House at Lalbagh, too.