In search of an old canvas

Nineteenth-century Scottish travel writer and artist James Baillie Fraser rediscovered his talent for drawing at Nahan, as a ringside viewer of the theatre of the Anglo-Nepal War. A British curator and a local recently retraced Fraser’s steps 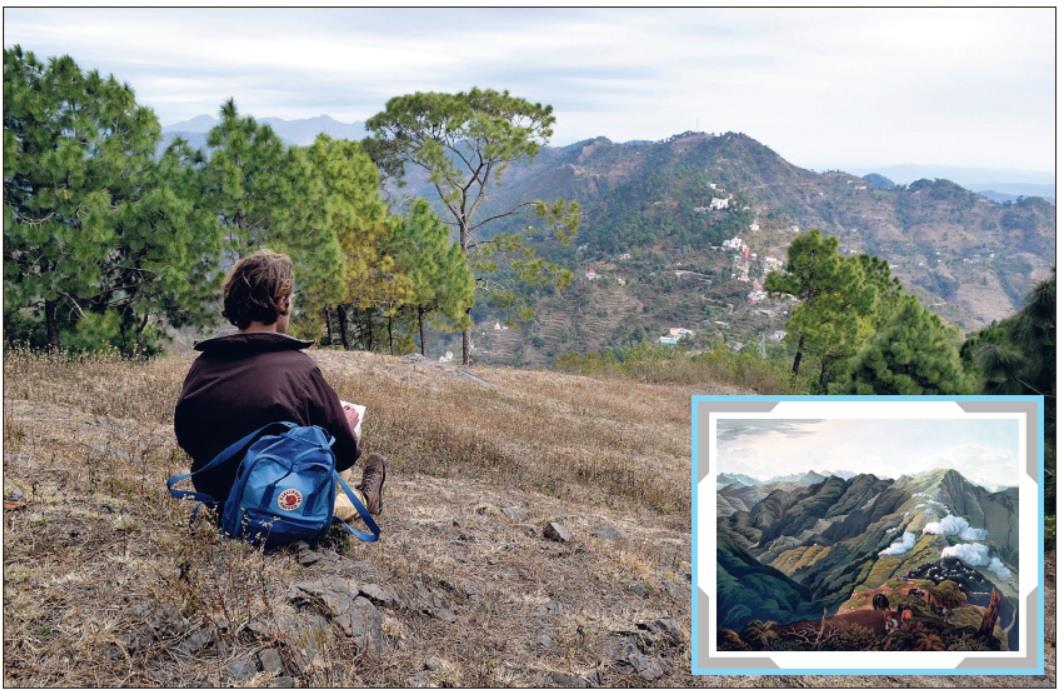 following fraser: Curator Ben Cartright at Jytock or Jaithak in Nahan. Inset: The ridge and fort of Jytock by Fraser.

As a frequent visitor to Kotkhai in Himachal Pradesh, I have jounced up to Shararru Pass a number of times, rarely tiring of the sweeping spectacle that awaits. Dominating the distant horizon, across the craggy Pabbar and Rupin Valleys, are the jagged Garhwal Himalayas of Uttarkhand. Six-thousander massifs Bandarpunch and Swargrohini serrate the skyline west of the seven-thousander Gangotri group. To the foreground is Rupin Pass, connecting Sangla with Uttarkashi, and the ridges of Nainital. To the panoramic left lies Hatu peak, with Jorkanden, another six-thousander in Kinnaur, rising behind it. At an easily accessed elevation of 3,000m, Shararru is an hour’s drive from my lodgings in Rukhla.

A sketchbook and some notes

On a recent visit, I tried to imagine the scene that awaited James Fraser when he clip-clopped to the pass one June noon in 1815. He subsequently recounted vividly in a travelogue, “Many half devoured bodies and skeletons of the wretched Ghoorkhas yet lay on the spot where they had fallen.” He has described further the half-finished stockade the Gurkha chieftain Kirtee Rana abandoned in the aftermath of the Jaithak Fort in Nahan falling to the East India Company troops. It was in Jaithak, while he waited for his younger brother William, the lately appointed political agent, to join him that ‘the devil of drawing broke loose and there was no holding him’. An artistic unfettering evidenced in his detailed sketch of The Ridge and Fort of Jytock. One of an eventual 20 aquatints collectively printed in 1820 as Views in the Himala Mountains.