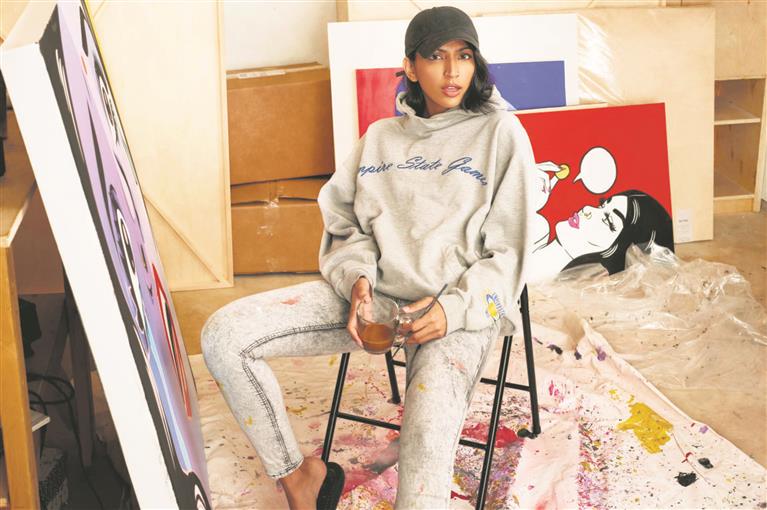 HER works are unmistakably Indian. Her heroines sport bindis and tikkas. They deal with desi dilemmas. They love desi lingo. They curse in desi too. Half Indian, half Bangladeshi, Maria Qamar’s desi pop art first took Instagram by storm and then, exactly a year ago, she broke into the New York art world with her first US solo exhibition, Fraaaandship!, at Richard Taittinger Gallery. Her works now come to India, courtesy Richard Taittinger Gallery and Tao Art Gallery in Mumbai, which are showcasing her new show, virtually.

Raised in Canada, Qamar was nine when the twin towers were ripped apart in America. As a young girl in a post-9/11 world, she had to endure bullying and racism. She later recalled, “I started going home and drawing comics about these experiences.” Qamar found her artistic voice five years ago through Instagram under the name @Hatecopy where her illustrations resonated with the desi community, particularly the second generation.

The new show, Me Meraself and I, expresses the depression and loneliness of extended solitude, courtesy Covid-19. “Me Meraself and I was an exhibition created in isolation, much like my previous works. The exception now is that, with the global pandemic and the rise of social awareness towards racial injustice, the effects on our collective mental health are more prevalent. This has made me more aware of my personal traumas, and what it means to be truly alone,” she says.

In the exhibition, Qamar engages with ways in which we turned to social media and technology to reach out and to cope. Works such as Naach and Then You Broke Up with Me on Zoom speak of the space digital apps have been occupying in our lives. Theek Thaak, a play on Tik Tok, points to the limited capacity of digital apps.

Qamar’s first exhibition at Richard Tattitinger was about South Asian millennials abroad. We ask her if she is an extension of the same, while taking a feminist view, and Qamar returns: “A feminist lens is the only lens I know to look through. My work has always been and will continue to be about female empowerment.”

Straight out of comic books, the works are interspersed with Hinglish idioms. How does a western audience respond to that, we wonder, but Qamar says the work is primarily made for a South Asian audience. “Many desi viewers have found the work very relatable. The reception in a broader sense has been positive overall as it invites even non-South Asian audiences to learn about our culture and language. We often have viewers Googling terms they don’t know and it is great to see people engage with the language and themes of the work.”

However, a spokesperson for Richard Taittinger Gallery’s gallery says that while many viewers in New York City do not speak these languages, her works are very relatable and have been very well received by viewers and collectors from different backgrounds. “It has been incredibly rewarding to have visitors who see themselves reflected in the work, and who have commented about how satisfying it has been to see their culture represented on gallery walls.”

In the last couple of years, Qamar has taken her works to Europe (December 2019), painted murals on restaurant walls, designed cutlery, written a book (Trust No Aunty) — all pop-hued, all for what she calls a naya zamaana...