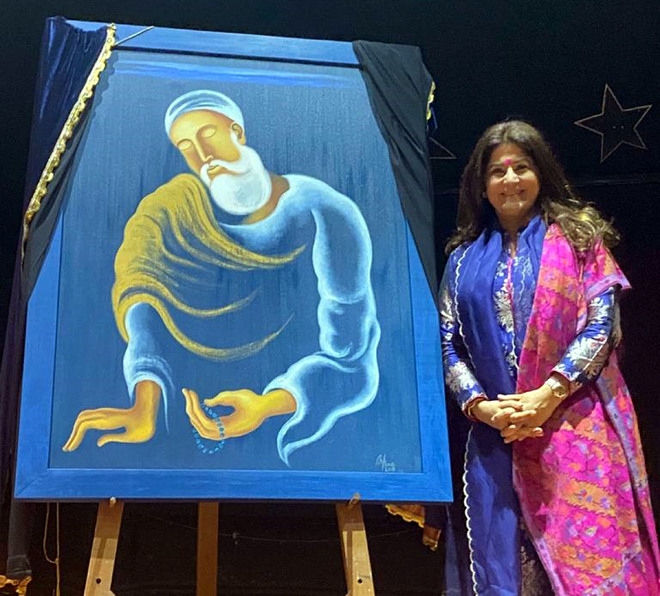 Senior artist Arpana Caur donated a painting from her series of works based on Guru Nanak Dev to the Indian Academy of Fine Arts.

Caur’s painting titled ‘The Seeker’ was unveiled at an invocation held at the art gallery to mark the birth anniversary of Guru Nanak Dev.

The painting will be kept at the permanent display collection of the IAFA at the gallery.

FICCI FLO’s chairperson, Meeta Mehra, who was instrumental in bringing the painting from Delhi to Amritsar, along with FLO committee members, unveiled ‘The Seeker’ while Arpana Caur joined the ceremony through virtual mode.

“The painting is beautiful oil on canvas depiction of Baba Nanak by none other than Arpana Caur. Baba Nanak’s teachings and philosophy are so relevant today as the concept of Oneness,” said Meeta.

Caur said it was her dream to donate a painting of Baba Nanak to the art gallery. She had earlier held an exhibition of 10 of her paintings inspired by Guru Nanak at Delhi as part of the 550 years of Parkash Purb of Guru Nanak Dev. She said spirituality resonates in her creative essence since childhood and her mother, Padamshri novelist Ajeet Caur’s writings and works also contributed to her artistic sensibilities.

Undleeb Aujla, wife of MP Gurjeet Singh Aujla, was among the guests of honour at the unveiling ceremony.