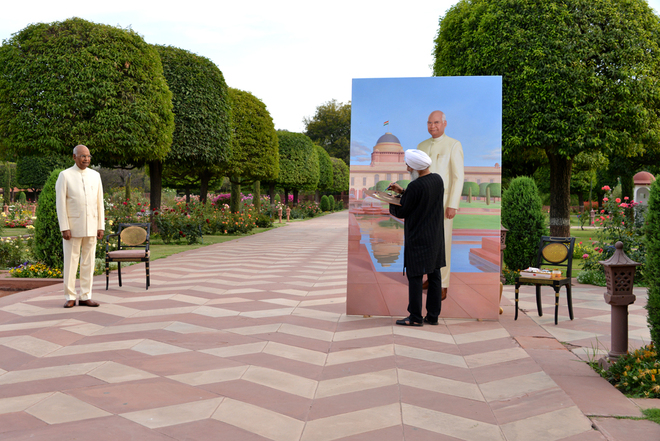 In a gallery at Upper Loggia in Rashtrapati Bhawan hang 14 portraits of former Presidents of the country. The last three are special for this region for they have been painted by an artist from Punjab. For the third time in a row, RM Singh has had the rare honour of painting the official portrait of the President of India, a task that has major portrait artists of the country lobbying for. President Ram Nath Kovind’s portrait was inaugurated last week.

Known for his life-like work, RM Singh was commissioned the work in November last and he completed it within six months, returning from his sojourn amid the strictest phase of lockdown in April.

It is a rare honour indeed, and Singh says he feels humbled each time he has been entrusted with the huge opportunity. “The best of the names are always in the running for the task. These are people I have immense respect for, people whose work I look up to. To do it for the third time is something that I could not have imagined.”

Before him, the only one from the region to have been commissioned the project was iconic artist Sobha Singh. “Giani Zail Singh had expressed the desire to be painted by the artist. However, he died before work on the portrait could be started,” says RM, adding that his works are a tribute to the master painter as also Meher Singh, who recently passed away.

What’s special about the current work is that it takes the President out in the open. While all the portraits on display have been painted indoors, President Kovind wanted the Rashtrapati Bhawan’s dome to figure in the painting. “The subject is most important to me. Before beginning my work, I asked him if he had anything in mind. The President even showed me a few spots in the Mughal Gardens where he wanted to be clicked.” However, the imposing building would have dwarfed all else. Singh then pushed it to the background, a stream of water adding subtle movement to the backdrop. The idea, all the time, was to keep the backdrop minimal. “Add more elements to a portrait and they start disturbing the work. It is a challenging job. One learns it with experience and by never stopping to learn,” he says, calling himself a student of art. “I might have been painting since I was in Class VI, but I study my craft every night. I read. I study works of masters online. One must never stop learning, and then one never stops growing,” he says.