The colour of music

The systematic expropriation of ‘black’ music by the ‘whites’ remains a constant reality, creating a ripple effect across the world 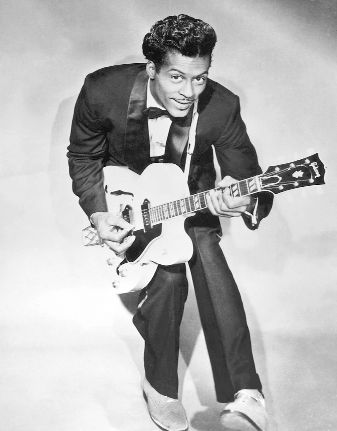 Whose music is it anyway: Inspired by blues greats of the 1940s, like Chuck Berry, the clubs in England became a breeding ground for the newer ‘white’ bands, playing the old music of the ‘coloured race’. wikipedia

The sound of music remains eternally sweet, wrapping in itself the unique flavours of the culture it is born in. It is for this reason that Pakistani artistes are heard singing in Braj, resorting to the thumris of gharanas found on this side of the border just as Indians sway to the popular Sufi tribute to Lal Shahbaz Qalandar of Sehwan, Sindh. Music transcends all barriers, of geography, religion, race, and is enjoyed by all, no matter its origins. In ethnically diverse countries like India and America, as the sound of music finds universal acceptance, it often blurs these social and racial fault lines. In fact, as in India, it blossoms even more at these cross-cultural intersections. But, what happens when the clash of cultures causes the metaphysic of the music to fall victim to discrimination and cultural appropriation? As protests rage over racial killings targeting the African Americans in the so-called land of opportunities, the systematic expropriation of ‘black’ music by the ‘whites’ remains a constant reality, creating a ripple effect across the world.

Hordes of Africans herded into this land and sold as slaves were forced to work on the estates of their white masters. They toiled in miserable conditions, trying to beat their blues with the rhythmic chants and clapping of hands to create a hypnotic beat. This was the first taste of African music for the whites, who till then were accustomed to western classical and that exposure was limited largely to the elites. It wasn’t long before Alan Lomax, an early 20th century ethnomusicologist, recorded the ardours of these folk musicians and captured the sound of the ‘blues’.

The slaves who had earned their freedom travelled to cities and made a mark in the world of music, threatening to upstage the whites. A unique style of music, Ragtime, emerged. Ruled by vigorous thumping of the piano, this would be a precursor to ‘jazz’. This music raged through nightclubs and sleazy joints with new stars, Scott Joplin and Jelly Roll Morton, sweeping the music scene. Prohibition further gave it an impetus as the fanatic trumpeting blared through the dungeons of the ‘speakeasy’ illicit bars. The fair skinned, however, kept themselves away from it, lending their ear only to the western classical sounds, ostensibly to display their egalitarian plumes.

‘Jazz’ was unstoppable in its era and soon wormed its way into the movies, including the animated ones. In a notable sequence of Tom & Jerry, Tom is seen crooning to “Is you is or is you aint my baby” by Louis Jordan. Today, its Hindi version, “Aise na mujhe tum dekho”, is also doing the rounds.

In the 1950s, however, Elvis shook up the music scene with his pelvic gyrating music and jazz and blues were temporarily relegated to the background. It was soon reborn, in the Sixties, in England. Inspired by blues greats of the forties, like Muddy Waters, Chuck Berry, Howlin Wolf and other Black legends, the clubs in England became a breeding ground for the newer ‘white’ bands but playing the old music of the ‘coloured race’. In fact, Keith Richards and Mick Jagger even named their group as ‘Rolling Stones’ after the Muddy Waters hit, “Rollin’ Stone”. This music of the 1960s broke all geographical barriers and young and old the world over, including India, swooned to the music of greats like Beatles, Led Zeppelin and Pink Floyd.

Masked in these songs was the misery of the black lives, but none noticed the pain. The hit song “When the levee breaks” was written by Joe Mccoy and Memphis Minnie at the time of the Great Mississippi Flood of 1927. It would be interesting to recall the origins of the number. The African slaves were ordered to construct ‘levees’ (or ‘bundhs’) to ward off flooding. In the wake of a breach, slaves on the watch would be washed away, and if they managed to survive, they would be killed anyway by their masters for failure to protect their interests. This song found its glory about 50 years later when Led Zeppelin included it in its fourth album. As the new form of fusion music with tenors of blues rock and heavy metal raged the scene, ‘jazz’ and ‘blues’ started acquiring a heritage status for the snobs, who now nostalgically recalled this music they earlier shunned contemptuously.

The legacy of this music, however, that should have belonged to its creators, i.e., the black African community, was appropriated by members of the dominant white culture. This is not to rob them of their credit to market the music successfully, but is about the creators not getting their place under the sun because of social faultlines that thrive even today.

In India too, jazz became the foundation of music for the Bollywood in the 1950s and 60s. Kishore Kumar’s yodelling in “Hum the woh thi” in Chalti Ka Naam Gaadi, Madhubala’s vivaciousness in “Aaiye Meherbaan” and the flippancy of “Gore gore o baanke chhore” would have been incomplete without the jazzy tunes that make them classics of today. Who can then forget the iconic sequence of Praveen Babi and Amitabh Bacchan in Deewar, with “I’m falling in love with a stranger” in the background sung exquisitely by Ursula Vaz, daughter of legendary Goan jazzman Chic Chocolate.

Today, when America erupts in a racial frenzy with the movement ‘Black Lives Matter’, one is compelled to say, “So does their music”. “I can’t breathe,” Floyd said, but the music of this targeted community breathes and wafts across like a whiff of scented air, breaching race and time barriers.