The moving world of Beili Liu

Embedded in her work are ideas of transience and fragility, of chaos and order, of despair and hope 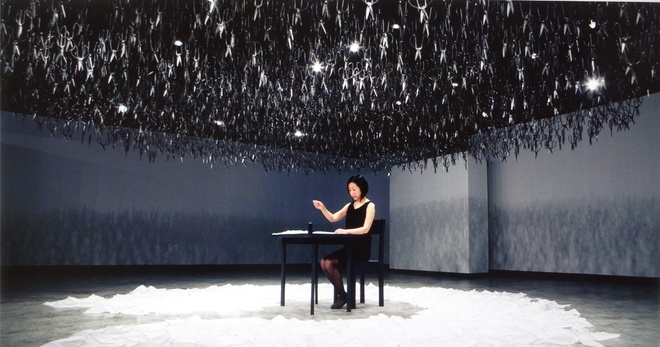 Liu and her Mending Project at the museum

We heard the news, read articles of the unimaginable situation of children being separated from their family at our southern border. We were saddened and shocked to see the images of migrant children in cages at detention centres. But the news cycle moves on with relentless speed. We forget — consciously or subconsciously — and the numbers become numbing, abstract concepts. — Beili Liu on her installation, ‘Each and Every’

Throughout Liu’s work, I am struck by a delicacy that speaks of vulnerability and yet projects a fearless quality that defies its fragility. — Comment by a visitor

There are images that sear, and keep coming back to you: ‘soft-footedly’, as a poet said, ‘holding red lanterns of pain in their remorseless hands’. All of us, each his own, carry some in our heads, nursing them, helpless in our lack of ability to erase. The image, in my case for instance, from My Lai in the Vietnam War: napalm bombs raining down, people running to flee a sea of flames, villages behind them reduced to rubble and ash; and, at the centre of the image, a young naked girl, her clothes burned off, screaming in agony. Or another: a photograph of the lifeless body of a young boy — a dark-haired toddler in fact — wearing a bright-red T-shirt and shorts, washed up on a beach, lying face down in the surf; child of some Syrian refugee couple attempting to reach a Greek island, using the sea route.

Somehow — or naturally perhaps — images like these came rushing to mind when I was in Texas recently and went on to see that jewel of an institution set in the heart of the Dallas Art District: the Crow Museum of Asian Art. Headed as it is by its Director of uncommonly broad sympathies, Amy Hofland, I have always associated the place with shows that move or lift the spirit. This time, a set of two exhibitions currently on had been specially recommended to me, both curated by Jacqueline Chau whose taste and abilities I value. What I was going to see, I was told, was the work of Beili Liu — a gifted young woman artist of Chinese descent now teaching at the Austin campus of the University of Texas — whom I did not know, or had not even heard of till now, because, even though I had taught at the same University, that was long years ago. The two installations bore tantalising titles: ‘Lure’ was one of them, and ‘Each and Every’ the other.

It all began at the ground floor: a spacious gallery bathed in the glow of a soft red light, in which a virtual forest of strings, all coloured red, hung from the ceiling; at the bottom end of each were hand-coiled disks of red thread, each pierced at the centre by a single sewing needle, enabling its suspension from the ceiling. Some discs were connected to another, as a pair; some pairs were made from a single thread, each meticulously worked out with hands. And as one saw with unbelieving eyes this magical garden of red ‘flowers’, subtle air currents set the red thread coils swaying and turning slowly while the loose strands of thread on the floor drifted and became entangled and then separated.You could walk lightly around the entire arrangement even if not quite circumambulate it while taking in the beauteous sight. But then, a didactic on the wall told you that the entire installation was inspired by an old Chinese legend of ‘The Red Thread’, which tells that ‘when children are born, invisible red threads connect them to their soul mates. Over the years of their lives they come closer and eventually find each other, overcoming great social divides or physical distances’. ‘Lure’, I reminded myself, was the title of the show.

Charmed as I was with what I saw, I was, candidly, completely unprepared for what I saw in another gallery, equally spacious, on another floor. Here, also, thousands of strings hung from the ceiling, but there was virtually no colour, none at all. All that one saw was literally hundreds of items of uniformly grey clothing of small children — frocks, shorts, trousers, socks, shoes — all neatly arranged, and all, lying close to one another, spread on the floor, even though not touching it. The whole installation felt like a quiet, monochromatic scene because each string and each garment was dry and coated with cement, the singular grey colour binding them into a dead uniformity. The clothes were permanently pressed, and yet not totally flat, ‘preserving some sense of their original shape, even maintaining the drapes, folds, and materiality familiar to fabric’. It was as if they had all belonged to children who had worn them once and had now disappeared in a nameless void. A silence lingered over the entire scene and one was gripped by an overpowering sense of sadness and loss. As a visitor, deeply moved by the sight, put it: “One almost became numb, staring out at them”. For her — possibly a mother who had been separated from her child by politics — “the forest of strings turned to mist and then a mirage in the distance went off into infinite space. In a split second, I visualised a crowd of children as they got up off the floor and faded off into space like spirits from another world”. Beili Liu, in this stunning installation, might have been speaking of herself as ‘an artist, mother, and immigrant’, but she was also addressing herself to ‘Each and Every’: the title that she had chosen.

Speaking for myself, I too, like the visitor who wrote the words that I have cited above, felt deeply moved by all this. There are embedded, in Beili Liu’s work, ideas of transience and fragility, of chaos and order, of despair and hope. And, taken together, they make for that reaching out towards understanding the ‘human condition’ [‘La Condition Humaine’] that Andre Malraux spoke of years ago. One sees it in an installation like the one in which Beili sits by herself, stitching, under a threatening bank of 1500 dagger-sharp scissors suspended from the ceiling above her, hovering like a cloud,to draw attention to the lot of Chinese seamstresses ceaselessly at work; or, in that other installation called ‘Thirst’ featuring a 38-foot tall drought-killed tree anchored in the center of the Lady Bird Lake in Austin. This, last mentioned, is her memorial to the loss of over 500 million trees that are known to have died of thirst in the droughts between the years 2011 and 2013.