‘CAA, NRC do not bode well for country’s democratic fabric’ 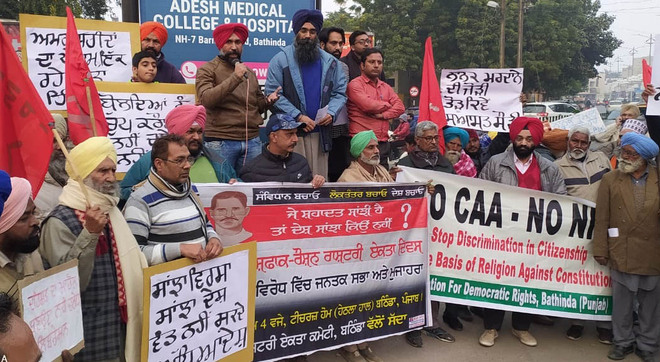 Members of various organisations take out a protest march against the CAA and the NRC in Bathinda on Thursday. Tribune photo

Various mass organisations took out a protest march against the Citizenship Amendment Act (CAA) and the National Register of Citizens (NRC) from Pensioners’ Bhawan to the bus stand here on Thursday. The protesters said India was a secular nation and nobody would be allowed to violate the Constitution.

Scores of protesters gathered near the Pensioners’ Bhavan and resorted to heavy sloganeering against the Union Government. They demanded revocation of the CAA and raised concern over the implementation of the NRC.

While condemning the Act and NRC, members of the Lok Morcha Punjab and the Naujawan Bharat Sabha said the two laws (CAA and NRC) would not bode well for the democratic fabric of the nation and foment communal tension in the country.

Sheerin, state committee member, Lok Morcha Punjab, said: “We condemn the brutal attack on Jamia students and demand a through probe into the matter. We also condemn the CAA and the NRC. India is a secular nation and nobody will be allowed to violate the constitution.” NK Jeet, state adviser of the outfit, also addressed the gathering.

Sekhon said: “We vehemently condemn and oppose the brutal attack on students at JMI university. Where are we heading today? Muzzling voice of dissent and that too by cane-charging students, who are the future, will spell doom for the nation. In this hour of mayhem, everybody needs to stand united against the brutality so that sovereignty of the country can remain intact.”