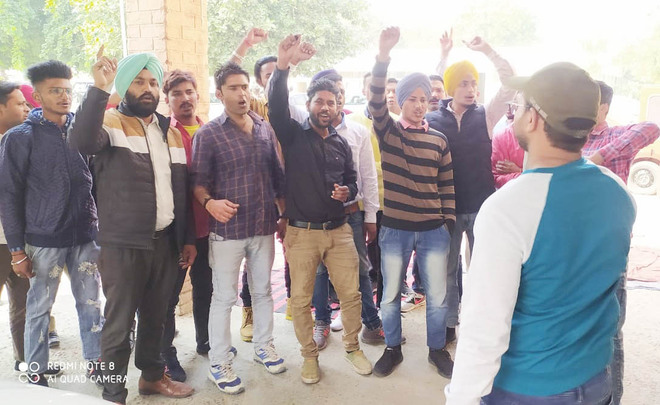 Members of the Multipurpose Health Employees’ Union hold a protest in Bathinda on Wednesday.

Members of the Multipurpose Health Employees’ Union (MPHW) staged a protest in front of Bathinda Civil Surgeon’s office and raised slogans against the district Health Department. They alleged that appropriate action was not taken against the district Epidemiologist from whose house, dengue larvae were found a few days ago. Union members demanded immediate action in the case.

Allegations and counter-allegations fly thick among officials of the district Epidemiology Unit of the Health Department and workers, who deliver services at the field-level. Talking to Bathinda Tribune, Gagandeep Singh, president of the union, said: “Field workers of dengue and malaria control wing of the department conducted a checking and found dengue larvae at the house of district Epidemiologist. The field workers then submitted a report to the Insect Collector of the department but due to interference by senior officials, the report was not forwarded to the Municipal Corporation and so punitive action was initiated in the matter.”

However, district Epidemiologist Dr Umesh Gupta has denied the allegations. He said: “No larva was detected at my house and the health workers have prepared a bogus report without the required approval from the technical staff of the Health Department. This is a routine practice adopted by the health workers, whenever they are asked to do their job properly or discharge their duties in remote or far-flung areas of the district.”

Dr Amrik Singh Sandhu, Civil Surgeon, Bathinda, said: “I heard that a dengue larva was found but it can be found in anybody’s house for that matter. There are breeding checkers who operate at the field level but members of the technical staff of the Health Department have to authenticate after a dengue larva is detected at any place.”

Dr Sandhu acknowledged that there is some rift going on between department officials and workers, who operate at the lower-rung of the hierarchy. “It was brought to my notice on numerous occasions in the past as well and it has been advised to both the parties to resolve their problems or misunderstanding amicably by reaching at a compromise but it seems they have decided to stick to their respective stance. So, I was left with no alternative than to mark an independent inquiry over the issue. A two-member probe committee has been formed by the department to investigate and find out real culprits behind the case.”

Meanwhile, a heated verbal exchange also took place between both parties during the protest which was thwarted by others. The union members have also warned that if “immediate and appropriate” action was not taken in the matter, they would hold another protest on November 26 at the same place.

Two suspected dengue deaths have been reported from the district in the past four days.

After falling sick, Sonu Kumar (21) was admitted to a private hospital in the city. Later when his platelets count dropped and the condition deteriorated, he was referred to DMCH in Ludhiana for further treatment. During treatment, his platelets count further dropped. Later, he developed liver infection following which he died on Tuesday morning.

In another case, Balraj Kumar was admitted to Max Hospital here after falling sick. Despite getting treatment for the past many days, his condition did not improve. He breathed his last at the hospital on November 16.

Dr Umesh Gupta, district epidemiologist, said, “Both patients tested positive for dengue. But, the actual cause of their deaths will be confirmed only after the dengue death review committee will submit its report.” Notably, more than 441 dengue cases have been reported from the district so far. The Health Department said it had stepped up preventive and corrective measures to curb the number of dengue cases in the district.