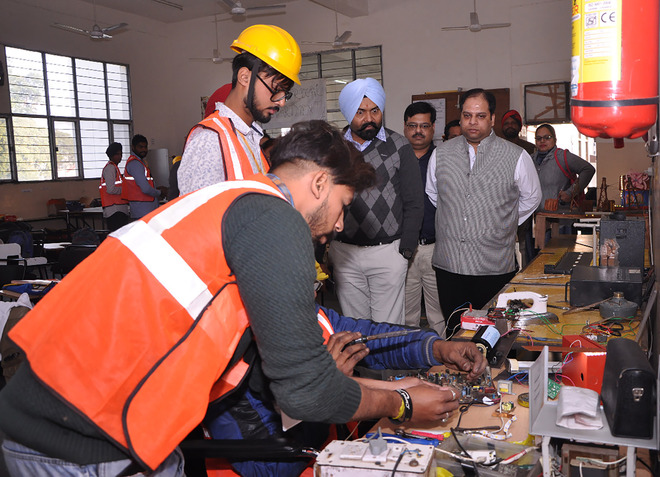 Three skill development centres being run under the central National Urban Livelihood Mission (NULM) and Pradhan Mantri Kaushal Vikas Yojana (PMKVY) are under the scanner over allegations of fraud and poor standards.

The Bathinda administration has reported fraudulent enrolment in the form of “ghost trainees” and inconsistencies in the quality of training centres in the district. While one centre has been placed under suspension, two others have been put on notice. The schemes, aimed at training youths at the grassroots and instilling entrepreneurship skills in them, are part of Prime Minister Narendra Modi’s ‘Sabka Saath, Sabka Vikas’ (collective development of everyone) initiative.

In a letter to the Manager, Punjab Skill Development Mission, seeking further action, the Additional Deputy Commissioner (Development) has stated M/s Rose Mary Educational Trust, Bathinda, which comes under the NULM, had marked the attendance of 30 students in ‘CRM domestic — non-voice course’ and 26 students in ‘general duty assistant — advance course’ but during a surprise inspection by the ADC (D), no students were found in both classes. Further, it stated, during the checking, no separate building was found for the centre affiliated with and accredited by the National Skill Development Corporation (NSDC). The centre was in fact based out of a building used for courses under the Deen Dayal Upadhyaya Grameen Kaushalya Yojana (DDUGKY) scheme.

It was noticed that photographs uploaded by the centre manager were of students of courses run under the DDUGKY scheme.

In a separate letter, it said M/s Saraswati Knowledge Park, Bathinda, which also comes under the NULM, had marked attendance of 28 students in ‘construction electrician LV course’, but during inspection, no student was found in the class. Similarly, wrong facts were presented by the centre, which also didn’t have a separate building.

Further, action has been initiated against the Shaheed Bhagat Singh Charitable and Educational Society, which comes under the PMKVY, over poor performance of students as they all flunked the “draughtsman mechanical course” exam twice. During a review meeting, the centre failed to provide a satisfactory reply. Gagan Kalra of M/s Rose Mary Educational Trust and M/s Saraswati Knowledge Park claimed: “On the day of the inspection, a student had fever, due to which we had to send back all students over Covid-19 fear.” Refuting the allegation of fraud, Kalra claimed they had been running the centres “efficiently” and had “provided internship to thousands of students after training so far”.