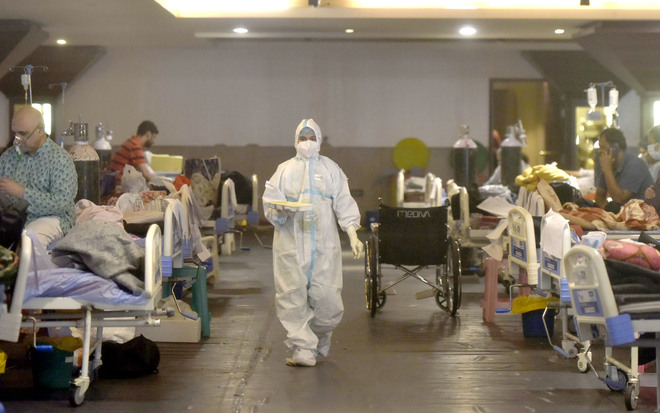 All level-3 beds are occupied in the district, which has set alarm bells ringing among residents. Bathinda is hit hard by the Covid pandemic with the number of positive cases increasing each day. On Sunday, Bathinda reported 17 Covid deaths and 812 new cases, taking the active cases to over 6,450 in the district.

As per official bed occupancy list of hospitals, of the 211 level-3 beds, 214 patients are admitted at 17 private hospitals in the district. Adesh Hospital is having 75 patients against the capacity of 60. Out of 978 level-2 beds, 754 were occupied in 39 hospitals of the district till Friday.

Finance Minister Manpreet Singh Badal held a review meeting with the Deputy Commissioner and other officials over the Covid situation at the DC office. He took information about sampling, vaccination and status of level-2 and level-3 beds in private hospitals in the district. A decision was taken to increase the beds in the district.

Later, Deputy Commissioner B Srinivasan issued directions to the hospitals in which he stated that level-2 beds had been increased from 859 to 946, while level-3 beds remained the same at 211.

Patients with minor symptoms are shying away from consulting doctors. Later, when the health deteriorates, they come to hospitals and require level-3 beds straightway.