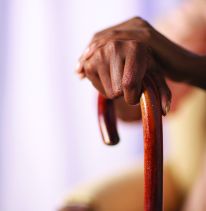 The condition of Gurtej Singh (72), a patient of dementia from Goniana in Bathinda, kept deteriorating for the past over three years after he failed to leave his addiction to alcohol. So much so that while being examined at the psychiatry ward at the Civil Hospital here recently, Gurtej could not even tell his name.

Another patient from Bathinda city could not tell what she had for breakfast. She was struggling with severe memory loss and found it difficult to even carry out her daily routine activities.

An estimated 141 per 1,000 persons in the 60-plus age category suffer from dementia in Punjab, as per the findings of a recent survey conducted by the Alzheimer’s and Related Disorders Society of India (ARDSI).

Psychiatrists said since there was no cure available, lifestyle changes could play a pivotal role in preventing progression of the disease. Notably, September is observed as the World Alzheimer’s Month every year to raise awareness and challenge the stigma that surrounds dementia.

As per experts, further progression or deterioration of patients with Mild Cognitive Impairment (MCI) into severe dementia can be prevented if they make the required alterations at the right time.

Talking to The Tribune, Dr Arun Bansal, head of the psychiatry unit at the Civil Hospital, Bathinda, said: “Patients with a history of alcohol consumption, smoking, hypertension, diabetes and deficiency of vitamin B12 are more prone to severe dementia. Early diagnosis and subsequent treatment is another big challenge, especially in rural areas where diseases related to brain are considered a stigma. Early symptoms of the disease (often forgetfulness) among elderly are often misconstrued for ageing by the lower socio-economic strata, thereby preventing early diagnosis and treatment. Dementia is not a normal part of ageing and it can affect young people too, albeit rarely.”

Dr Bansal, on an average, examines approximately 50 to 60 patients of MCI and dementia in a month, although he admitted that there was no marked increase in the inflow of such patients over the past few years.